Does this image confirm a few Galaxy S9 rumors? Maybe, maybe not

A Weibo user has posted a screenshot purportedly taken on a Galaxy S9 prototype that may or may not confirm rumors swirling around Samsung’s upcoming flagship. Taken from Samsung’s S Health app, the screenshot shows a demonstration on using the heart rate sensor, and if you look closely, the fingerprint sensor seems to be placed below the camera. Also worth noting here is that only a single rear camera can be seen. If you’ve been following Galaxy S9 rumors recently, you will likely be wondering whether this image is giving us some solid information to back them up.

Well, that’s what we’re wondering, too. While images inside Samsung’s apps are often placeholders that are replaced later, why would the company show a device that doesn’t exist (not with that design) in a placeholder if it wasn’t secretly in the works? It certainly doesn’t seem to be a Galaxy A (2018) phone, which isn’t likely to sport a heart rate sensor if all the leaks and rumors are to be believed. And it’s rather hard to imagine the placeholder in the screenshot is from a time when Samsung may have tried to put the Galaxy S8’s fingerprint sensor below the camera module and failed, as it would have been replaced a long time ago.

Here’s the leaked image from Weibo:

And here’s how it compares to the one seen in S Health on the Galaxy S8 and Galaxy Note 8 (from left to right): 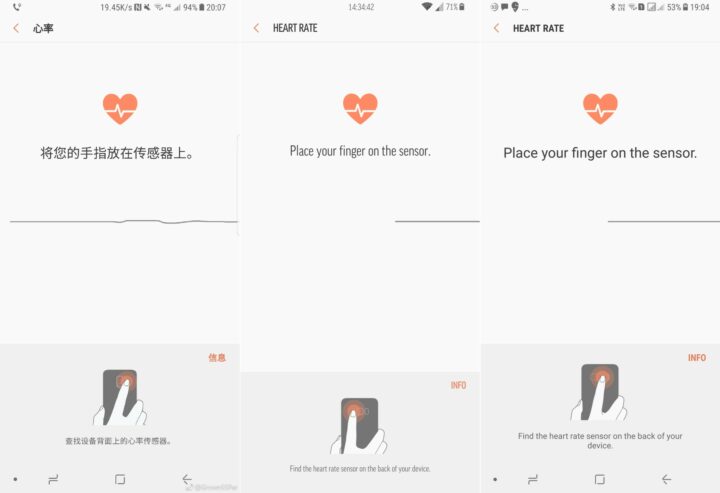 Now, unless the source is trying to fool everyone with an old image, it leaves us with an interesting possibility. The phone seen in the screenshot could actually be the smaller of the Galaxy S9 flagships, which is said to have only a single rear camera. Heck, maybe even the Galaxy S9+ will miss out on a dual camera setup, but that would be impossible unless Samsung wants to lose potential consumers. Dual cameras are almost a must-have for smartphones these days, and at least the S9+ has to have one (among other things) to do well in the post-iPhone X world.

To trust or not to trust…

While we’re closer to the Galaxy S9’s official launch now than we were three weeks ago when we first heard of the 5.8-inch S9 possibly being limited to a single rear camera, it’s still tough to trust these leaks. The Weibo forums have often been the source of valuable information on upcoming devices, and even though that image looks legit, it remains to be seen if it really is telling us what we can expect from the Galaxy S9.