India is one of the markets where Samsung is running behind with security updates for flagship phones right now. The Galaxy S8 and Galaxy S8+ were updated with the October security patch in early November in the country, while mid-range phones like the Galaxy A7 (2017) followed soon after with the November patch. Well, Samsung is now rolling out the October patch to the Galaxy S7, its 2016 flagship, in India.

The update is only available for the regular Galaxy S7, but the Galaxy S7 edge will probably join the party soon. There’s nothing on this update other than the November security patch from what we know right now. The November patch fixes the KRACK Wi-Fi exploit, 61 Android vulnerabilities (KRACK is a Wi-Fi issue that is not exclusive to Google’s mobile operating system), and six Samsung vulnerabilities. The update is available over the air and bumps the build number up to G930FXXU1DQJB. 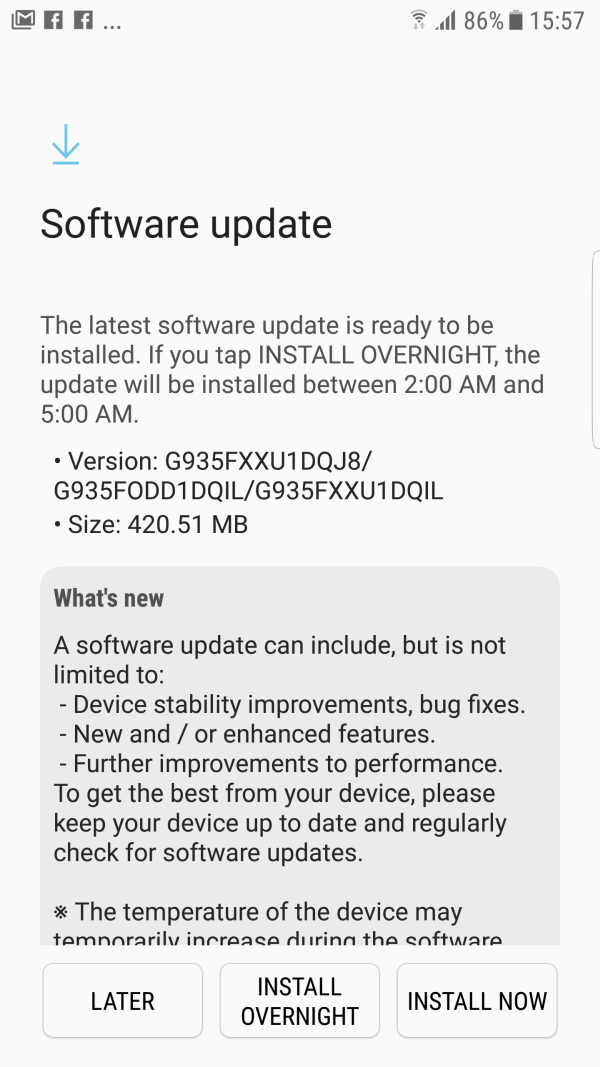 The OTA is slightly more than 400 MB in size, so make sure you use a Wi-Fi connection if you don’t want to see your mobile data plan being eaten up. The related firmware is also available in our database. We’ll update this story when the Galaxy S7 edge starts getting the October security patch in India, and, of course, we will also let you know once the November patch makes its way to the S7 and S7 edge in the country.

Do you have the update on your Galaxy S7 or S7 edge yet?

Update: The Galaxy S7 edge is also receiving the update with build number G935FXXU1DQJ8. Get it by hitting the Download updates manually button in the Settings » Software update menu or use the firmware from our database to update should it not be available over-the-air on your phone just yet.