In less than a month, the next episode in the Star Wars saga, The Last Jedi, will release in theaters around the world, and it looks like Samsung will be launching a special edition of the Galaxy Note 8 based on the highly anticipated movie. Well, at least that’s what we can surmise from an image that has been published on Twitter by a leakster with a good track record.

Galaxy Note 8 to get the Star Wars treatment

The lack of any changes to the design of the phone is a red flag, although it’s possible Samsung isn’t willing to give us a glimpse of the Galaxy Note 8 Star Wars edition just yet. Or, the company will only be adding wallpapers, ringtones and other Star Wars media to differentiate it from the regular Note 8, which would be in line with the Pirates of the Caribbean edition of the Galaxy S8 that launched in China earlier this year. Of course, we would prefer a heavily customized version akin to the Galaxy S6 edge Iron Man edition, but that probably won’t happen. 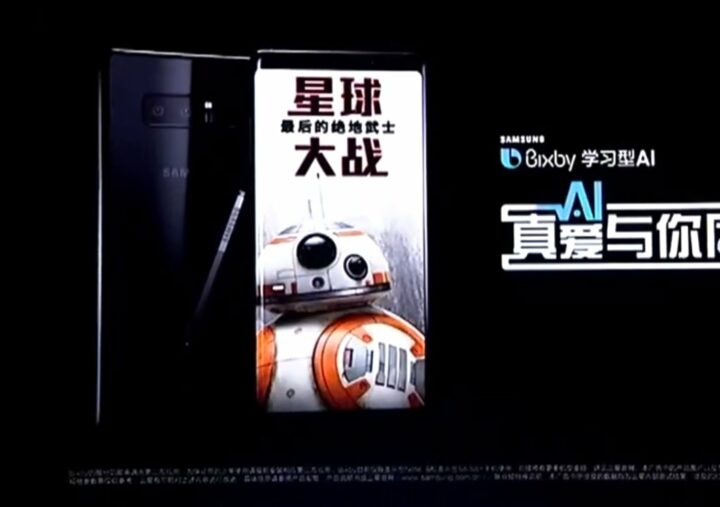 The image seems to have been captured at the recent event in China where Samsung also announced Bixby for the country and teased a new artificial intelligence-based user interface for the Galaxy S9. Considering the wallpaper shows BB-8, the cutesy droid character introduced in Star Wars: The Force Awakens, it’s possible Samsung was only using it to showcase the aforementioned AI user interface.

For now, there’s no guarantee a Star Wars edition of the Galaxy Note 8 will be released. If it is, here’s hoping Samsung makes it widely available instead of keeping it exclusive to China.

Would you be interested in the Galaxy Note 8 Star Wars edition?