Report: Samsung sold one smartwatch for every 23 smartphones shipped in Q3 2017

Samsung makes among the best smartwatches available on the market, but the Korean company isn’t selling as many smartwatches as it should be, according to data released by analysts at Canalys. In the third quarter of this year, Samsung sold one smartwatch for every 23 smartphones shipped, falling behind Apple and also selling fewer units than Xiaomi, Fitbit, and Huawei.

Apple sold one watch for every seven smartphones, while Huawei sold one for every 14 smartphones shipped. Samsung is currently holding on to 5 percent of the market share and managed to ship 0.5 million units of the Gear S3. It does seem like the Gear Sport wasn’t included in this data, although that wouldn’t have made much of a difference given the Gear Sport’s limited availability right now. The data for next quarter might improve, however, even if Samsung may not manage to match the competition in terms of overall sales. 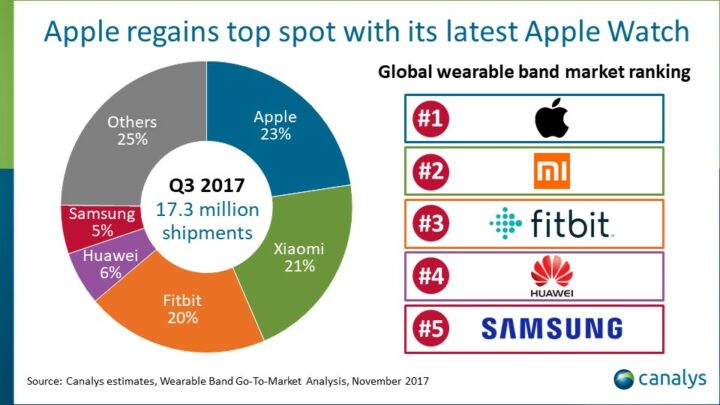 According to Canalys, the cellular-enabled Apple Watch 3 was a major reason for the Tim Cook led company’s increased sales, suggesting that consumers are interested in smartwatches that can make calls and connect to a data network without a phone. That might be an obstacle for the Gear Sport, which doesn’t offer cellular functionality by virtue of being more focused on fitness than any previous Samsung smartwatch. As for Fitbit and Xiaomi, it’s unlikely Samsung will ever catch up, not unless it starts focusing on affordable fitness trackers, or at least those that cater to a wide variety of price points. At upwards of €200, the Gear Fit2 Pro may not be enough.

Our Gear Sport is review underway, so it won’t be long before we are able to tell you if it’s worth purchasing. Spoiler: It’s certainly a good option for fitness freaks looking for a premium smartwatch to keep track of their exercise routines, and we’ll have more details in our upcoming review. Have you purchased a Samsung smartwatch in recent months?