We exclusively reported last year that Samsung was working on a new high-end flip phone for China. The SM-W2017 was then unveiled by the company in November. We’ve seen a lot of leaked images of the handset’s successor recently. The apparent changes suggest that the flagship flip phone has gone through a process of refinement.

The leaked images of the SM-W2018 that we’ve seen so far show some great design improvements. Gone are the rounded corners of its predecessor. This gives the handset a more solid feel. Samsung seems to be shooting for an industrial look and feel with this handsets. The accouterments certainly betray that as there’s lots of polished metal and a glass back. 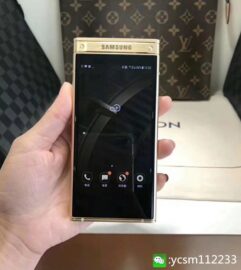 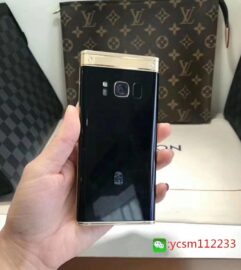 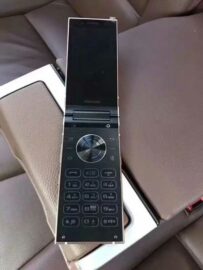 It’s because of this glass back that the gold color of this new handset is more muted than its predecessor. Samsung has achieved a nice contrast between the black and the gold. The back also houses the fingerprint sensor alongside the rear camera.

The sensor’s position has been changed from beneath the camera lens to right alongside it. That’s how it is on recent flagships like the Galaxy S8 and Galaxy Note 8.

A final judgment on the feel of this device can only be passed once there’s some hands-on time with it. The initial impressions are very good, though.

As far as the specs go, the SM-W2018 is expected to feature two 4.2-inch Full HD displays. It’s going to be powered by a Snapdragon 835 processor with 6GB RAM and 64GB storage. A 12-megapixel rear and 5-megapixel front camera will be onboard as well with a 2,300mAh battery.

Since its predecessor was launched in November last year, it’s likely that Samsung might officially launch the SM-W2018 soon. It’s expected to cost $2,000 in China.