We reported last month that Samsung has started working on the Android 8.0 Oreo update for the Galaxy S8 and Galaxy S8+. We also came across newer Oreo firmware versions for both devices recently which suggested that the Galaxy S8 Oreo beta program might be launching soon.

It’s now being said that the Galaxy S8 Oreo beta program is going to launch in the United States on Tuesday, October 31. Galaxy S8 and Galaxy S8+ owners will be able to sign up for the program starting Tuesday.

Galaxy S8 and Galaxy S8+ owners will reportedly be able to sign up for the beta via the Samsung Members and Samsung+ apps. It’s said that there will be 7500 spots per device in the Galaxy S8 Oreo beta program.

Those who want to join the program will need to be on T-Mobile or Sprint. That’s because flashing the U1 firmware isn’t going to let them join the beta if they’re not on the aforementioned carriers.

Signups are said to open on October 31 and Samsung will roll out the beta on the very same day. The beta firmware is going to bring all of the new features and improvements included in Android 8.0 Oreo. There’s also talk of a new UI/UX for the Galaxy S8.

Samsung is yet to confirm any details about the highly anticipated Galaxy S8 Oreo beta program. It’s unclear if the beta will be expanded to more countries. It’s also not known if there’s going to be a beta program for the Galaxy Note 8.

Samsung is expected to release Android 8.0 Oreo for the Galaxy S8 and Galaxy Note 8 early next year. 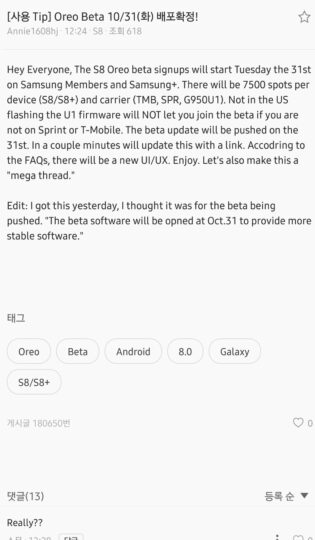