Sprint is the latest carrier in the United States to start rolling out the June security update for the Galaxy S7 and Galaxy S7 edge. Unfortunately, the changelog doesn’t reveal any additional details about the 300MB upgrade, but judging by its size, we’re guessing it bundles a couple of additional bug fixes.

For those unaware, the June security release, which started making the rounds on June 6, transports a total of 96 fixes for Common Vulnerabilities and Exposures (CVE) in the Android operating system and 23 patches developed by the firm specifically for its Galaxy-branded smartphones and tablets.

Galaxy S7 and Galaxy S7 edge owners should receive a notification when the update is available to download and install on their handset, but if they’re feeling impatient they can manually check to see if it’s ready by opening up Settings, tapping Software Update, then selecting Download Updates Manually.

It’s worth noting that they’ll will need to have at least 50 percent of battery or connect their device to a power outlet in order to install the upgrade. We’d also recommend joining a reliable Wi-Fi network, as nobody with a strict data limit wants to waste 300MB on a firmware update. 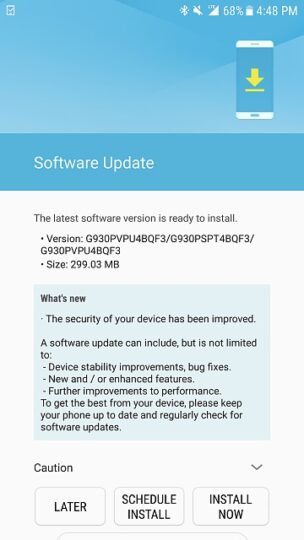