This is Samsung’s Desktop Experience Station for the Galaxy S8

We’ve seen a glimpse of what Samsung’s Desktop Experience Station for the Galaxy S8 would look like through an illustration found in the Galaxy Tab S3’s firmware, and we are now getting a look at the actual thing through images leaked by Winfuture.de. The DeX station will remind you of Samsung’s fast wireless charger, but it’s a different beast altogether, offering numerous ports to allow for proper PC-like functionality via the Galaxy S8 and S8+.

The station (or dock, depending on what you want to call it) has a USB Type-C port for providing power to the Galaxy S8 (yes, there is no wireless charging built into this thing, but there is fast charging via the Type-C port), two standard USB 2.0 ports, an 100 Mbps Ethernet port, and an HDMI port that can power 4K displays at 30 fps. The station has a cooling fan inside to keep temperatures in check while the Galaxy S8 is acting like an actual PC.

Of course, it remains to be seen just what kind of PC functionality the DeX station will provide, although Samsung should be offering a detailed look at the March 29th unveiling of the handsets. The dock will be priced at Euro 149.99, which seems like an okay price for such an accessory.

What do you make of the DeX station? 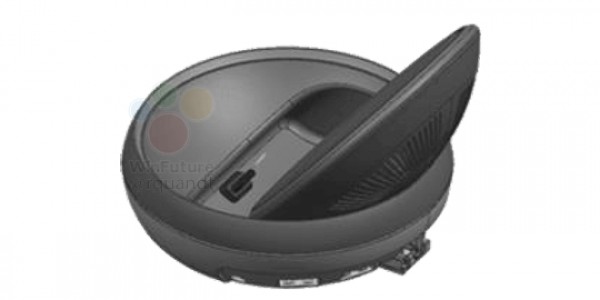 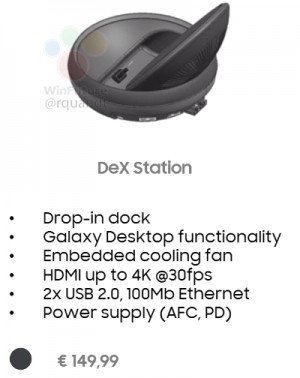 Samsung’s developed a wireless keyboard with DeX and it’s …