We first reported exclusively in September last year that Samsung had the Galaxy C5 Pro in the pipeline. There have been a lot of rumors and reports about this handset ever since. Samsung may only launch it in China initially but we’ve now spotted something that suggests the company might launch the Galaxy C5 Pro in markets outside the People’s Republic.

The Galaxy C5 Pro model number SM-C5010 was first spotted at the Wi-Fi Alliance in late December, this was the China-specific variant of the Galaxy C5 Pro. We’ve now spotted the same handset with model number SM-C501X at the Wi-Fi Alliance. While it doesn’t confirm anything right now, it’s a big indication that there’s a possibility that Samsung might launch this handset in markets outside China at some point in the future.

According to previous reports, the Galaxy C5 Pro may feature a 5.2/5.5-inch Full HD display with a Snapdragon 625 processor under the hood coupled with 6GB of RAM, 64GB storage, a 16-megapixel front and rear camera aside from Android 6.0.1 Marshmallow.

Samsung is yet to even hint when it’s going to make the Galaxy C5 Pro official. 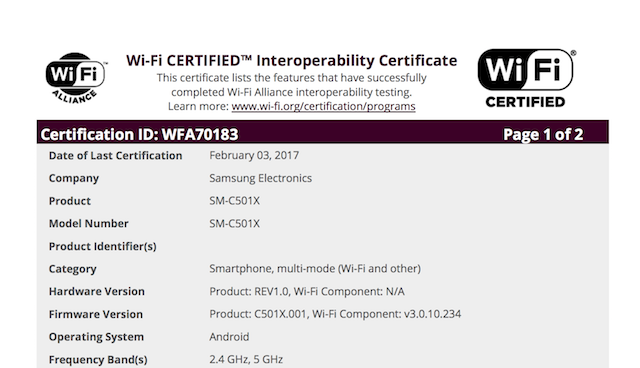 Samsung Galaxy C5 Pro gets its TENAA and Wi-Fi certification