What was on your mind at the end of 2016? It’s likely the case that you were planning a New Year’s Eve party with relatives and friends, making resolutions for the New Year that you may live to love or regret later on. If this was your situation, you’d be surprised to know that you had something different on your mind than the Korean giant. Samsung ended 2016 with foldable smartphone patents on its mind – looking to the future of its devices and what will likely be called the “Next Big Thing” when patents become leaked prototypes beyond the one we’ve been shown so far (this one, too).

While we’ve seen some photos of prototypes that are already in existence, Samsung has not yet completed its work on the foldable smartphone (codenamed Project Valley). These new patents show Samsung contemplating the use of multiple forms of biometric identification such as the fingerprint scanner and iris scanner/camera, though the Korean giant intends to use additional forms of biometric ID beyond these: palm print, face, voice, palm line, and other means of authentication. In other words, the fingerprint scanner and iris scanner are but two forms of authentication that Samsung intends to co-exist within its “Galaxy.” There will be others added to these, a glimpse into the future for those who believe smartphone interest has peaked. 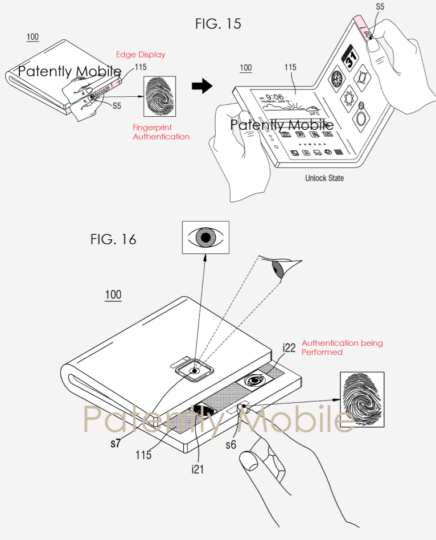 Samsung is said to have two foldable smartphone models in mind for the market, one with a dual-display setup, the other with a single flexible display, despite its hesitancy over market demand for mobile’s next frontier. The industry still seems to point to 2018 or 2019 as the ideal timeframe for these futuristic smartphones, but there is some expectation that Samsung will push forward with at least one foldable smartphone this year.