The Qualcomm Snapdragon 835, the successor to the incremental Snapdragon 821, was first leaked by Russian blogger Eldar Murtazin (who called the end of Google’s Nexus line long before the Pixels) and has now been confirmed by both Qualcomm and Samsung. With that said, the immediate question pertains to the imminent SoCs arrival on the market, specifically with Samsung’s 2017 Galaxy S8 launch in a few months. While there’s still some speculation as to it all, the SoC’s specs have leaked online – giving the Snapdragon 835 a Galaxy S8 landing.

According to the Snapdragon 835 spec sheet, the upcoming Qualcomm SoC will have model number MSM8998, slightly ahead of the current Snapdragon 821 SoC (model number MSM8996) and have an octa-core CPU (in contrast to the Snapdragon 821’s quad-core setup), Adreno 540 GPU, UFS 2.1 technology (as opposed to UFS 2.0), and be produced based on a 10nm FinFET process that the company unveiled six months ago. If the 10nm FinFET leak is true, then the 6GB RAM claim for the Galaxy S8 will bring 6GB of RAM worldwide.

Finally, the spec sheet claims that the new Snapdragon 835 will be released in Q1 2017, with a Galaxy S8 landing at MWC 2017. There’s little in the way of confirmation regarding any of this, but specs leaked from China are often accurate (remember the 6GB RAM Galaxy Note 7 that Samsung later acknowledged?). Still, as with everything else initially, take this with some salt for now. 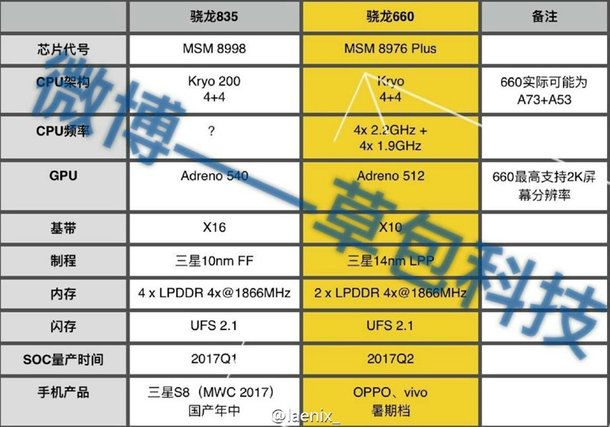 Samsung’s semiconductor division is a significant driver of growth for the conglomerate. The company has …

Samsung and Qualcomm have reportedly started working on the Galaxy S9& …

There are two variants of the Galaxy S8 and S8+. One variant uses Samsung’s Exynos 8895 chipset, while …