Less than a week after it surfaced on the official Geekbench online database, the Galaxy A3 (2017) has been granted Wi-Fi certification. Seeing as the handset has already acquired its Bluetooth credentials; it looks like the only pitstop it has to make before it hits the shelves is at the FCC — so it’s perfectly possible that Samsung will release the device on the open market before the year’s out.

If recent leaks, rumors and speculation are anything to go by, it looks like the Galaxy A3 (2017) will pack a 4.7-inch display, a 1.5GHz octa-core Qualcomm CPU, 2GB of RAM, 8GB of expandable flash memory, a 13MP rear-facing camera, an 8MP selfie shooter and a variety of internal sensors, including a pedometer and barometer. It’s also expected to ship running Android 6.0 Marshmallow. 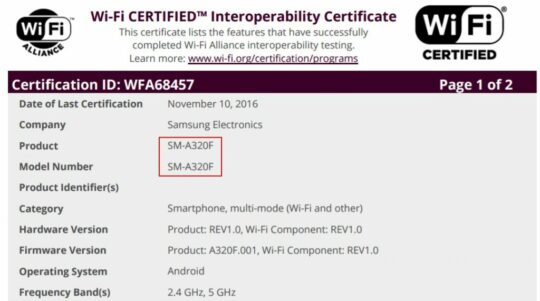