Earlier today, an unannounced Samsung smartphone bearing the model number SM-G532F was spotted on the official AnTuTu benchmark database. The handset, which is believed to be the upcoming Galaxy Grand Prime+, has been in the press a lot over the course of the past few weeks, most recently when three different region-specific variants surfaced in support documents on the firm’s website.

The benchmark listing reveals that that the Galaxy Grand Prime+ sports a display with a resolution of 960 x 540 pixels, a MediaTek MT6737T quad-core CPU, a Mali-T720 GPU, 2GB of RAM, 32B of internal memory, an 8-megapixel rear-facing camera and a 5-megapixel selfie shooter. The device ships running Android 6.0.1 Marshmallow, but is expected to receive the Nougat update. 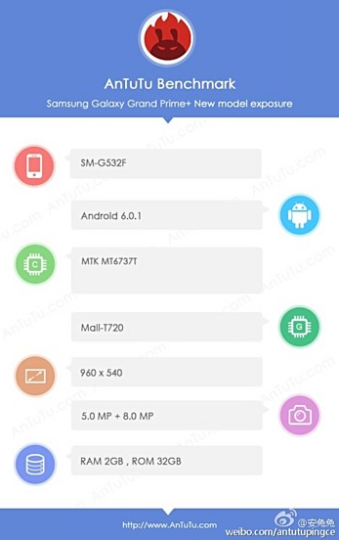