Previous reports suggest that the Galaxy A8 (2016) is going to feature a 5.7-inch full HD display with a 2.1GHz Samsung Exynos 7420 processor under the hood that’s coupled with 3GB of RAM. Its AnTuTu sojourn goes to show that the handset may be available in 32GB and 64GB internal storage versions that will also have microSD card support for external memory expansion. The handset is also expected to feature an 8-megapixel rear and a 5-megapixel selfie camera as well as Android 6.0.1 Marshmallow. In case you’re curious about what this handset looks like, renders of the Galaxy A8 (2016) were leaked recently. Since it has been over a year since this handset’s predecessor was launched it’s quite likely that Samsung might make the Galaxy A8 (2016) official in the near future. 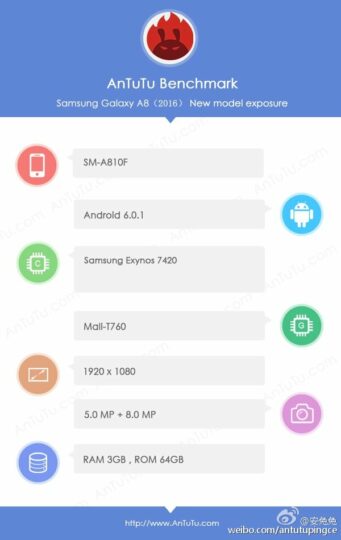