Samsung Galaxy Tab A pops up on T-Mobile’s website

The Galaxy Tab A, a mid-range tablet that was announced sometime in April, has popped up on T-Mobile’s website. An 8.0-inch variant of the Galaxy Tab A, that is listed on the carrier’s website, runs TouchWiz that’s based on Android 5.0 Lollipop. It’s a tablet with premium exterior design but relatively mid-range internal hardware. 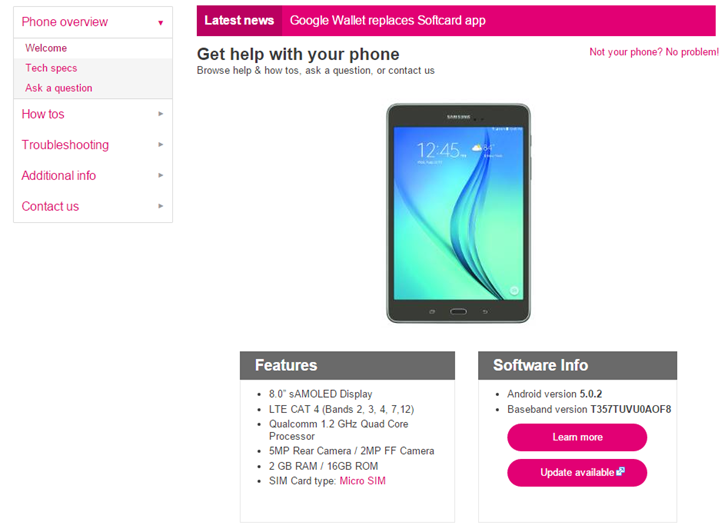 The tablet features an Apple iPad-like 4:3 display and a metal body, but its hardware internals only be termed as mid-range. It features an 8.0-inch Super AMOLED display with a resolution of 20124 x 768 pixels, a 64-bit quad-core Snapdragon 410 processor, 2GB RAM, 16GB internal storage, a microSD card slot, Cat. 4 LTE connectivity, and a 4,200 mAh battery.

The Wi-Fi only variant of the Galaxy Tab A 8.0 recently got a price cut to $200. The carrier hasn’t announced its price, but considering that it’s a Wi-Fi + Cellular variant of the Tab A 8.0, we expect the tablet to be priced somewhere around $299 mark.