Samsung’s smartwatches should be running Android Wear instead of Tizen

Samsung has been at the forefront of wearable devices ever since the original Galaxy Gear went on sale. The Korean manufacturer has launched three smartwatches, a fitness tracker, and a virtual reality handset since then, and it’s safe to say Samsung has been moving much faster than pretty much any other company out there when it comes to wearables. Samsung is currently the number one smartwatch vendor in the world, and it is using its lead in the market to take its time with its next smartwatch – the Orbis, which will have a round display – and make it as close to perfect as possible.

Sadly, the fact that the Orbis will run Tizen instead of Android Wear is something that just doesn’t sit well with me.

Tizen is a nice operating system. It’s light, runs fast, and allows Samsung to offer much better battery life than smartwatches running Android Wear. Being Samsung’s own operating system, Tizen has allowed the company to offer considerably more functionality than the competition in all its smartwatches (the original Galaxy Gear didn’t run Tizen, but it ran a full version of Android and was hence as functional.) Furthermore, putting Tizen on its watches is helping Samsung eke out a wearable ecosystem of its own, one that runs on its in-house OS instead of one developed by the competition.

Unfortunately, all this hasn’t exactly resulted into the Gear watches providing the best experience when you look at the fact that a smartwatch is supposed to offer convenience and access to things that you would usually take out your phone to do. The fact that we can get relevant data from various apps right on our wrist is one of the few reasons that justifies the existence of the smartwatch product category, but thanks to the Gear watches running Tizen instead of Android, we have seen a dearth of supported apps despite the first Gear smartwatch having come out almost two years ago.

Compare this with Android Wear. It’s been less than a year since the first Android Wear smartwatch hit markets (you can read our Gear Live review here), and we can already see a ton of popular apps offering support for the OS (the fact that Google makes it extremely easy for developers to port their apps to Android Wear helps considerably). These apps offer functionality that you couldn’t do before without taking out your phone – for example, you can book a taxi using apps like Uber right from your wrist, or reply to a tweet using voice control on Twitter apps that support it. 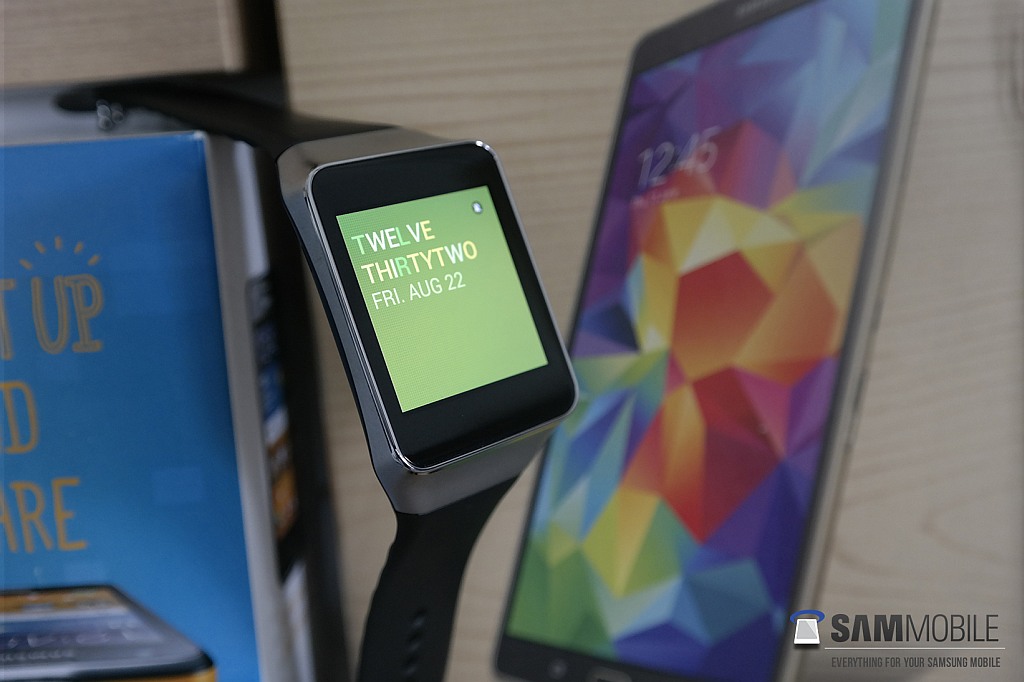 There are a lot of other use cases for apps on a smartwatch, but they all require the developer to actually spend time building in those functions for the smartwatch version of their app. On Android Wear, we have seen a lot of apps bring such features to the smartwatch, but on Samsung’s in-house Gear watches, developers haven’t really been interested in doing the same. The result? Apps that basically only show you notifications without the option to act on them or perform a task right from the watch.

There’s another feature – or the lack thereof – that really puts Samsung’s Gear smartwatches behind those powered by Android Wear. That’s Google Now, Google’s personal digital and voice assistant. Google’s voice recognition technology is pretty much unmatched in the industry, and it is considerably superior to Samsung’s S Voice, which is preloaded on every Gear smartwatch. Then there’s the fact that S Voice doesn’t do any of the intelligent assistant stuff that Google Now is capable of (basically, presenting you with important information before you ask for it), and it becomes even more agitating that we don’t have access to Google Now on any of Samsung’s Tizen-powered watches.

I totally understand why Samsung is doing this. In its efforts to create its own ecosystem which can help it reduce its independence on other companies, making every smartwatch run Tizen makes sense. But it also means that we are stuck with two huge limitations – the lack of functional smartwatch apps and an amazing voice recognition/digital assistant technology. The former is something Samsung can’t really help (though developers naturally aren’t too interested in making apps for watches that won’t run with a non-Samsung phone or tablet, even if the Korean manufacturer is responsible for a majority of Android device sales), but the fact that something like Google Now isn’t available to users just because Samsung wants to use its own OS on its wearables is one that doesn’t sit too well with me.

Unless Samsung can reach a level of competence where it can challenge Google as far as lack of apps and brilliant voice recognition is concerned, I really don’t see any point of any Gear smartwatch running Tizen. The Orbis might be shaping up to one of the best smartwatches the world has ever seen, but considering the high prices of smartwatches and their lack of the aforementioned functionality on Samsung’s Gears, it’s ultimately a poor experience for end users.

P.S.: If one were to point out that Android Wear is quite limited, I would agree wholeheartedly (especially when you talk of battery life). But Android Wear can only grow more powerful and more functional as time passes, and unless Samsung can address the two biggest issues its smartwatches have, there’s really not much point spending so much on a Tizen-powered watch.