Why the huge delay in the review, you may ask? Well, we actually bought the Samsung Gear Live, so as it wasn’t a review sample, we weren’t bound by time limitations with the device – which is usually two weeks. We wanted to extensively test out Android Wear, as it was our first encounter with the operating system. Over the last three months, we have worn the Gear Live every single day, and we are finally ready to give you folks our full review of the device.

In the entire wearable industry, Samsung is the only OEM with the most experience in smartwatches, considering the Gear Live is the company’s fifth smartwatch, while other OEMs have just started to jump on the smartwatch bandwagon with their first smartwatch announcements. If we take a look at the Galaxy Gear – Samsung’s first ever smartwatch – and the Gear Live, the difference is significant, both in terms of hardware and software. This indicates that the Korean giant has taken customer feedback into account and designed the product accordingly.

Design-wise, while the Galaxy Gear was heavy, bulky and sported hideous faux screws, the Gear Live is lightweight, slim (at 8.9mm), and sleek. It’s not like you’re wearing a miniature computer on your wrist – well, you kinda are, but you’re not. The Gear Live’s design is very similar to the one found on the Gear 2, they both feature the same design philosophy, but there are a few key differences between the two. However, we prefer the Gear Live’s simple and elegant design over the Gear 2’s. The watch is made out of three materials, which include plastic, aluminium and the scratch-resistant Gorilla Glass 3.

The back of the smartwatch houses a heart-rate sensor and the charging pins. A microphone and a power/home button can be found on the right side of the device. Both left and right sides of the watch feature a little insert for attaching the charging cradle, which we will talk about a little further down in the review. The watch uses a standard 22mm strap, which is user-replaceable and comes with quick-release pins – switching factory straps were never easier, and the Gear Live features a snap-on clasp, same as the Gear Fit. We think Samsung could have done a better job with the stock strap, because the current one doesn’t feel and look premium at all, and we are not big fans of the snap-on clasp. The Gear Live is also IP67 water and dust resistant, which means the device can be worn in all conditions. We have tested this particular feature pretty extensively – we have worn it while washing our hands, in the rain and even in the shower a few times, and it still works as advertised. Samsung’s first Android Wear watch features a crisp and vivid 1.63-inch Super AMOLED display with a resolution of 320×320, which comes in at 278 pixels-per-inch. As expected from an AMOLED panel, the colours are vibrant, black levels are deep and viewing-angles are outstanding – you can literally look at the display from any angle and the colours won’t look washed out. The Gear Live also comes with an always-on screen feature, which keeps the display awake at all times but decreases the brightness to the lowest level when the device is not in use, this allows the user to glance over the latest information without pressing any buttons or touching the display itself. And, as an AMOLED doesn’t require a backlight, because it consists of an active matrix of OLED pixels which can be individually turned on and off, it’s much more power efficient when compared to a traditional LCD.

The only drawback of equipping a watch with an AMOLED panel is that it’s not bright enough to be easily used outdoors. We found the display to be extremely difficult to view outside, unless we cranked the brightness all the way up to the maximum level, which resulted in an increased battery usage, and that’s not feasible. We wish Samsung had armed the Gear Live with an ambient light sensor, which would have automatically adjusted the brightness of the display and rectified the issues with outdoor visibility. 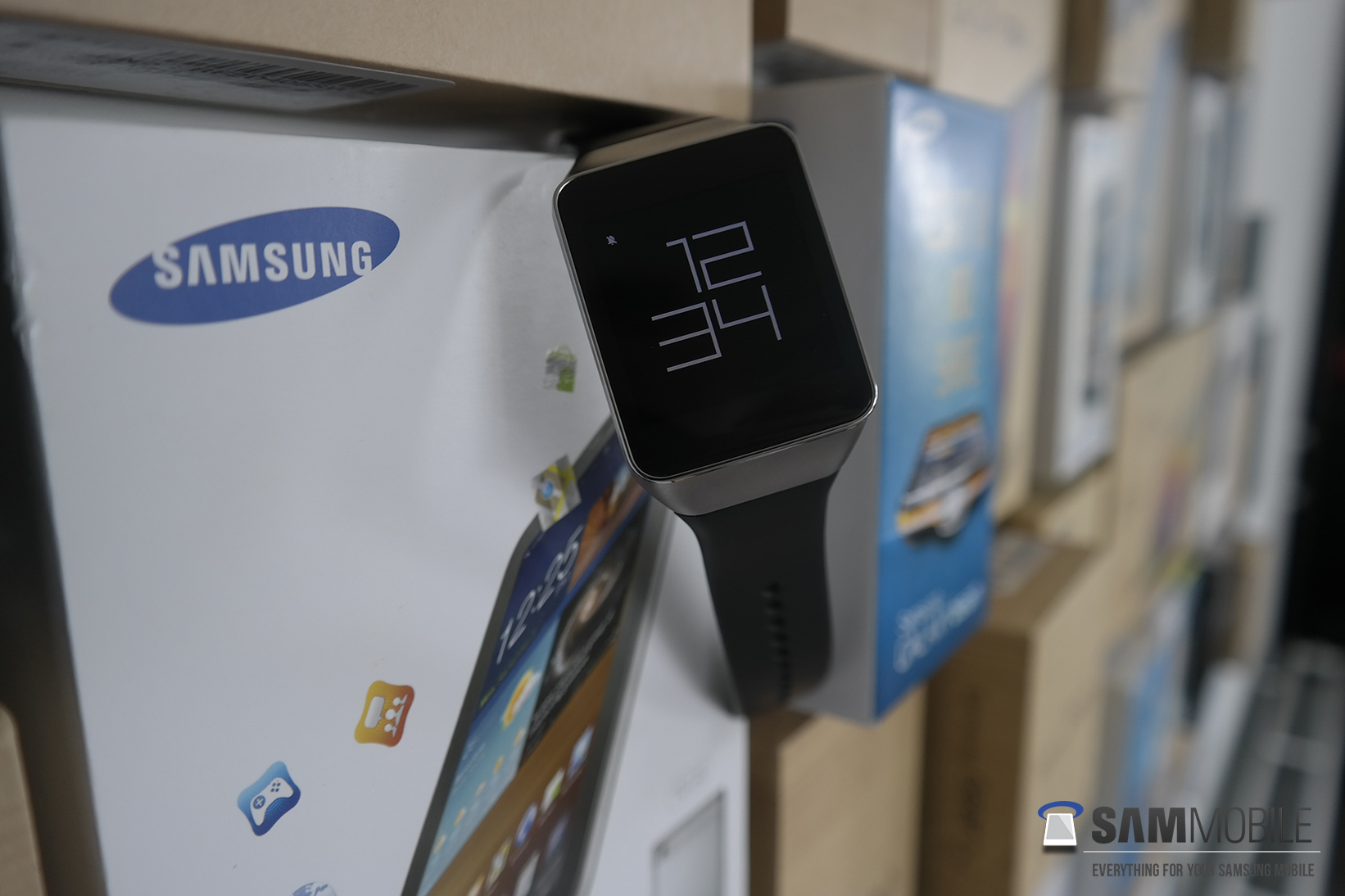 Android Wear is the world’s first true operating system designed specifically for smartwatches and wearable devices; it’s currently based on the latest version of Android, which is Android 4.4 KitKat. Samsung’s Gear Live is one of the first smartwatches to be powered by Android Wear, and that’s what makes the Gear Live so much better than Samsung’s other offerings. To summarise Android Wear in a few words, it’s like taking notifications and Google Now from your smartphone, and putting them on your wrist – that’s what we always wanted. 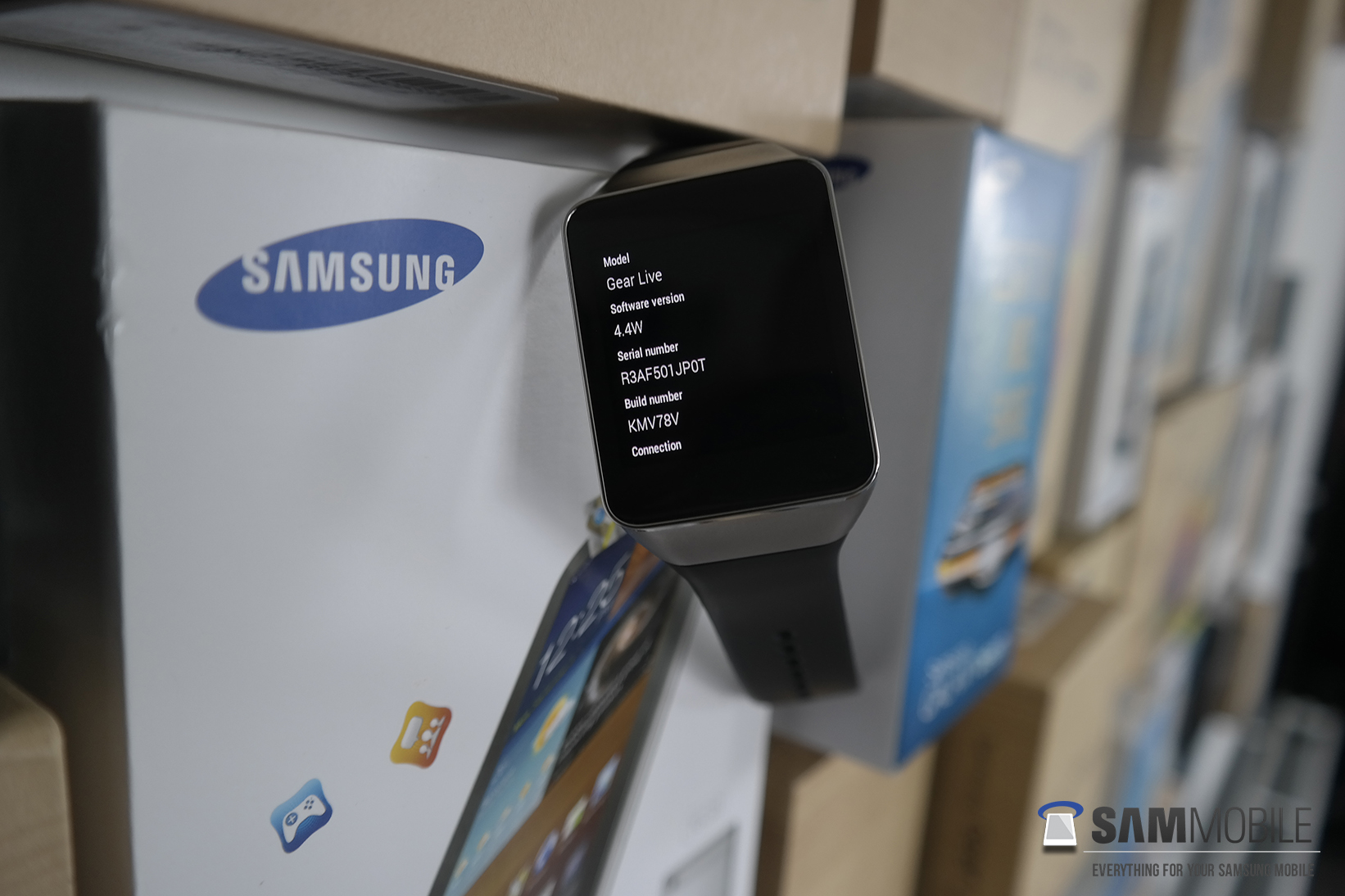 Having Google Now on your wrist means you will get notifications of things you have not thought of getting notifications about, It will prompt you when your Amazon package gets dispatched, will let you know about the weather, will also tell you about how much time will it take to reach your office or home according to traffic conditions, and will do much more. You might think that these notifications aren’t important to you, but they really are, you just need to try Google Now for two weeks and you will be amazed how much it knows about you. As the Gear Live sports a microphone, you can use voice commands to open applications, monitor your heart-rate, track your steps and even perform a Google search. However, only three search results will come up and to browse through more, you will need to switch to your smartphone. Also, specific voice commands need to be used to open applications or perform any tasks, or else it just turns the voice command into a Google Search inquiry. So it can be a little frustrating, and we feel Google could have implemented this a bit better than its current form.

Now let’s talk about customisation. Google has announced that it will not let OEMs put a custom skin on top of Android Wear, because it wants to keep the experience exactly the same on all Android Wear devices. However, what Google does allow OEMs to do is create custom watch faces for its smartwatches, which kind of sets them apart from one another. And, we must say, customising watch faces is fun! On the Gear Live, there are thirteen watch faces to choose from, but if they don’t suit your style, you can can download third-party watch faces from the Play Store and make your Gear Live unique. Android Wear is also grabbing attention of app developers, and the Android Wear’s app selection is growing rapidly. Many big players – like WhatsApp, Evernote, Tinder, Runtastic, and many more – are adding Android Wear support to their existing applications, which increases the productivity factor of the smartwatch and makes users’ life a lot easier. Our favourite application is Google Maps – we have been craving navigation on our wrist since the launch of the Galaxy Gear and it’s finally here, and it’s awesome.

The Gear Live is no slouch when it comes to raw performance. It’s packing a Qualcomm Snapdragon 400 SoC clocked at 1.2GHz, Adreno 305 GPU, 512MB of RAM, and 4GB of internal storage. Scrolling through menus is a breeze and applications load in no time, sometimes its so quick that it feels like if they were already running in the background. The user interface is fast and smooth; except when Android Wear decides to glitch out, then the whole amazing experience goes down the drain. Android Wear mainly glitches in dim-mode, sometimes the graphics get stuck and the actual time gets off by a few minutes. However, we were able to resolve these issues by simply tapping the display and waking up the device from dim state. The Gear Live features Bluetooth 4.0 LE connectivity, and is equipped with four sensors including an accelerometer, a compass, a gyroscope and a heart-rate sensor.

All Android Wear smartwatches are infamous for their 1-day battery life, due to their small batteries. The Gear Live sports a 300mAh lithium-ion battery, and we have managed to squeeze two days out of the smartwatch with normal use. The trick here is to turn off the Gear Live at night, because you won’t be using it while you’re asleep anyways, so there is no point in keeping it on and wasting power. Initially, the power consumption on the Gear Live was ridiculous, but it got much better with software updates. The Korean giant ships the device with a snap-on charging cradle, which is very similar to the one found on the Gear 2 and way better than the one which came with the Galaxy Gear. However, we still think that Samsung needs to come up with a new design for its charging cradles, as the current ones simply look hideous and are prone to get lost. So, here’s a tip: keep the charging cable attached to the cradle at all times.

Thanks to the Korean giant’s experience in smartwatches, the Gear Live has stellar hardware, but if it only had an ambient light sensor and a slightly bigger battery, it would have been simply perfect. Software-wise, Android Wear is currently the top platform for wearables, but it’s still immature, and will take a few iterations until Google can fix all the issues and implementations. Overall, we like what Samsung has accomplished with the Gear Live, and we can’t wait for its successor.

Currently, there are only three Android Wear powered smartwatches on the market – Samsung Gear Live, LG G Watch and Moto 360. Even though more have been announced, they are not on sale yet. The G Watch and the Gear Live feature a square display, while the Moto 360 features a round display. If you prefer square watches, we would recommend you folks to get the Gear Live, because it’s much more stylish and premium looking than the G Watch, and if you prefer round watches, go for the Moto 360. The choice is yours.

Samsung is a formidable giant within Android, so it makes sense that Samsung would be at the heart of any discussion regarding Google’s world-dominating mobile OS. Once again, all eyes are on Samsung due to what has been perceived as the company’s interesting relationship with Android Wear. This week’s issue concerns the Korean giant’s long-term, short-term, or no-term […]

It has been a while since Samsung released an Android Wear-powered smartwatch. The Gear Live was its first and only smartwatch powered by this platform and even though Google has made significant improvements to Android Wear, Samsung has stuck with its own OS for smartwatches. Samsung has now said that it’s not going to make […]

Samsung hasn’t been very keen on Android Wear, but the company was still the first (along with LG) to launch a smartwatch running Google’s OS for wearables. This watch was the Gear Live, which is basically a rehashed Gear that cut down on some features (like calling) thanks to Android Wear’s limited nature. Needless to say, the […]