Alleged and convincing first images of the Gear VR surface

A few weeks back, we brought you an exclusive first look at the Samsung Gear VR Manager – the app which would contain the instruction and settings regarding Samsung’s upcoming virtual reality device. Today it seems that the device has been photographed in its full, real-world glory.The Gear VR is being developed in tandem with Oculus VR and is scheduled to debut alongside the Galaxy Note 4 at Episode Two of Unpacked 2014. Should this turn out to be true, Samsung will command a very serious position as the first entrant into what is expected to be an industry with near-limitless potential.

Upon closer examination of all of the components captured within the image, we see that there are the goggles that strap onto one’s head, the phone (used as a screen), and a control pad. The phone here seems to be a Galaxy S5 but Oculus VR has been known to operate with the Galaxy Note 3, and given the side-by-side launch with the Galaxy Note 4, it wouldn’t be unreasonable to expect that to be the device implemented. (Continue after the break) 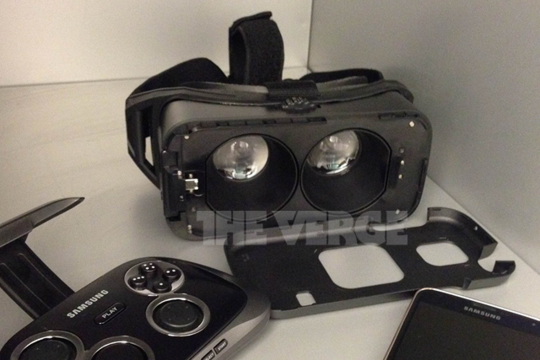 The goggles headset carries what appears to be a focus dial positioned on the top and has a detachable casing which is used to attach the phone. On the front, stage-right side of the goggles is a protruding USB 3.0 plug which is the point of connection with the phone. The other major piece to this puzzle shown here is the control pad. The pad appears to have some sort of handle extending from the front of it, but its not clear what that would be designed to accomplish. Aside from that, there are three toggles/d-pads featured along with a very dicey button scheme (pun intended).

The inclusion of this control pad is somewhat of an interesting development. In our previous discoveries, we went into a thorough explanation of how a responsive touchpad and button located on the side of the goggles themselves was going to be the method by which the user controlled the device and media. Now, unfortunately this new image does not allow us to see what this touchpad looks like, although it does seem that you can faintly make out its outline there on the stage-right side of the goggles. Given that we know of this touchpad/button layout from our comprehensive walk through of the Gear VR Manager, its safe to assume that its there, but nonetheless it does beg the question of what the separate control pad is designed to do. If games begin to be designed with this technology in mind, then a control pad will absolutely be utilized to further the experience.

The thought that production-level virtual reality could finally be around us as soon as three weeks from now is thrilling to say the least. As a global innovator, Samsung could offer a revolutionary value proposition to consumers with this kind of technology, only furthering its already high quality devices and extensive ecosystem. Getting excited about the Gear VR is absolutely encouraged; the reveal takes place September 3rd.