After a plethora of leaks and speculation, Samsung just made the Galaxy Tab S official at its GALAXY Premiere 2014 event in New York, USA. Samsung has already launched a ton of tablets in 2014, which include the Galaxy Tab4, TabPRO and NotePRO, and the Galaxy Tab S is its latest flagship tablet lineup. The Galaxy Tab S is Samsung’s thinnest and lightest tablet to date, and sports industry’s best mobile display – Super AMOLED.

Design-wise, the Galaxy Tab S is modern and sleek with its rounded corners and slim edges. The back panel features a soft-touch perforated pattern, just like on the Galaxy S5. As explained by Samsung itself, the small holes on the panel follow a visual rhythm, providing tactile pleasure to the fingertips when users touch the back of the device. 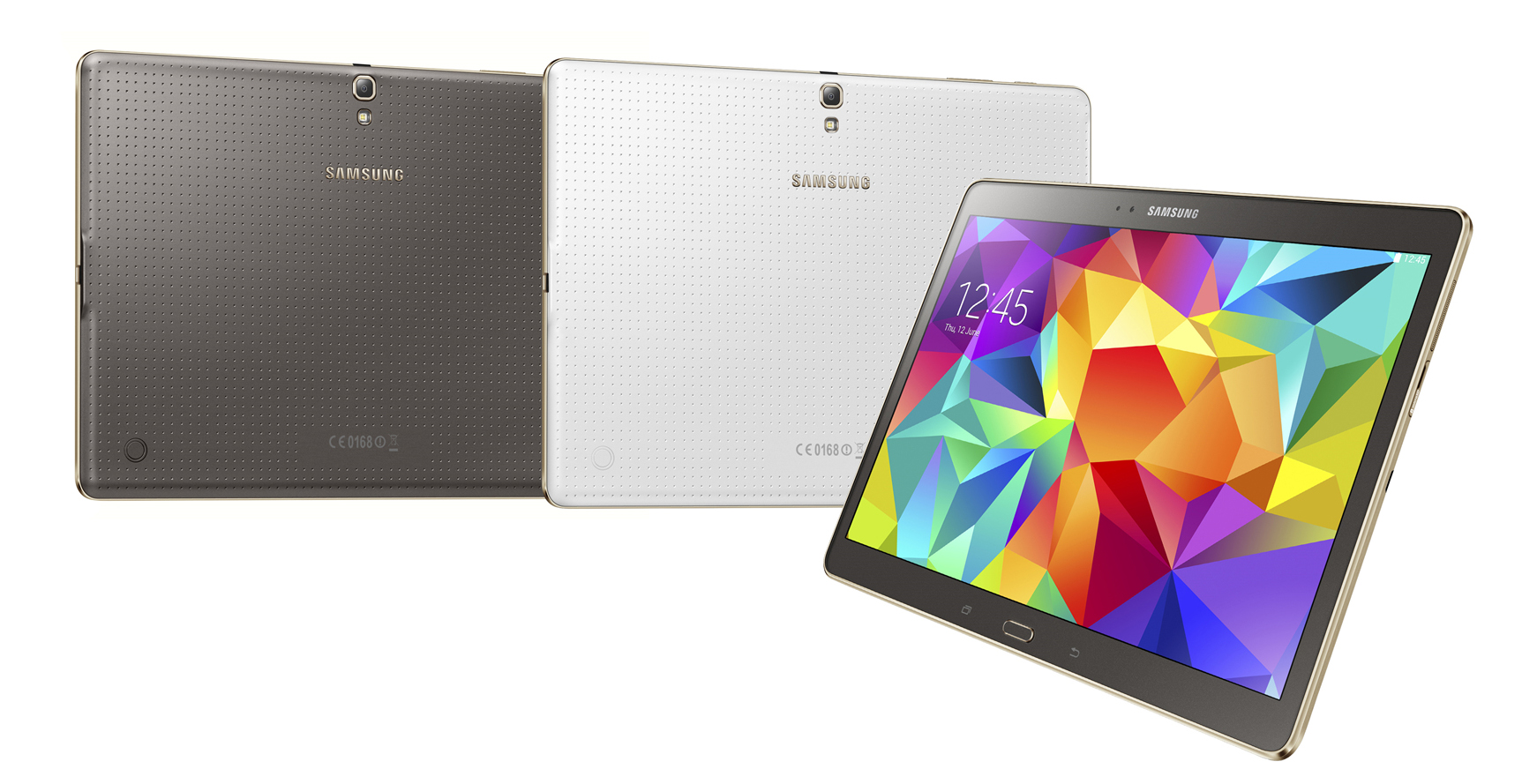 Now let’s talk about its biggest selling point, the display. Samsung has been using Super AMOLED displays in its flagship smartphones and digital cameras since a few years now, but have used it only once in a tablet device. In 2011, Samsung unveiled the first ever tablet device with a Super AMOLED Plus display, the Samsung Galaxy Tab 7.7, but that was mainly to test the technology itself. Since then, Samsung has never used the OLED technology in any of its tablet devices, mainly due to the technology itself being too young and new, until now.

The Galaxy Tab S is the world’s first device to sport a WQXGA (2560×1600, 16:10) Super AMOLED display, and the Korean giant is bringing the device in two display sizes, 8.4- and 10.5-inches. The Super AMOLED display delivers more than 90% of Adobe RGB colour coverage and has a remarkable 100,000:1 contrast ratio which provides deeper and more realistic images by making blacks darker and whites brighter. Samsung’s Adaptive Display technology further enhances the visual experience by intelligently adjusting gamma, saturation, and sharpness based on the application being viewed, the colour temperature of the viewing environment and ambient lighting. Also, as the Super AMOLED technology switches each individual pixel on or off, and doesn’t require a backlight, it consumes less energy than comparative LCD displays. 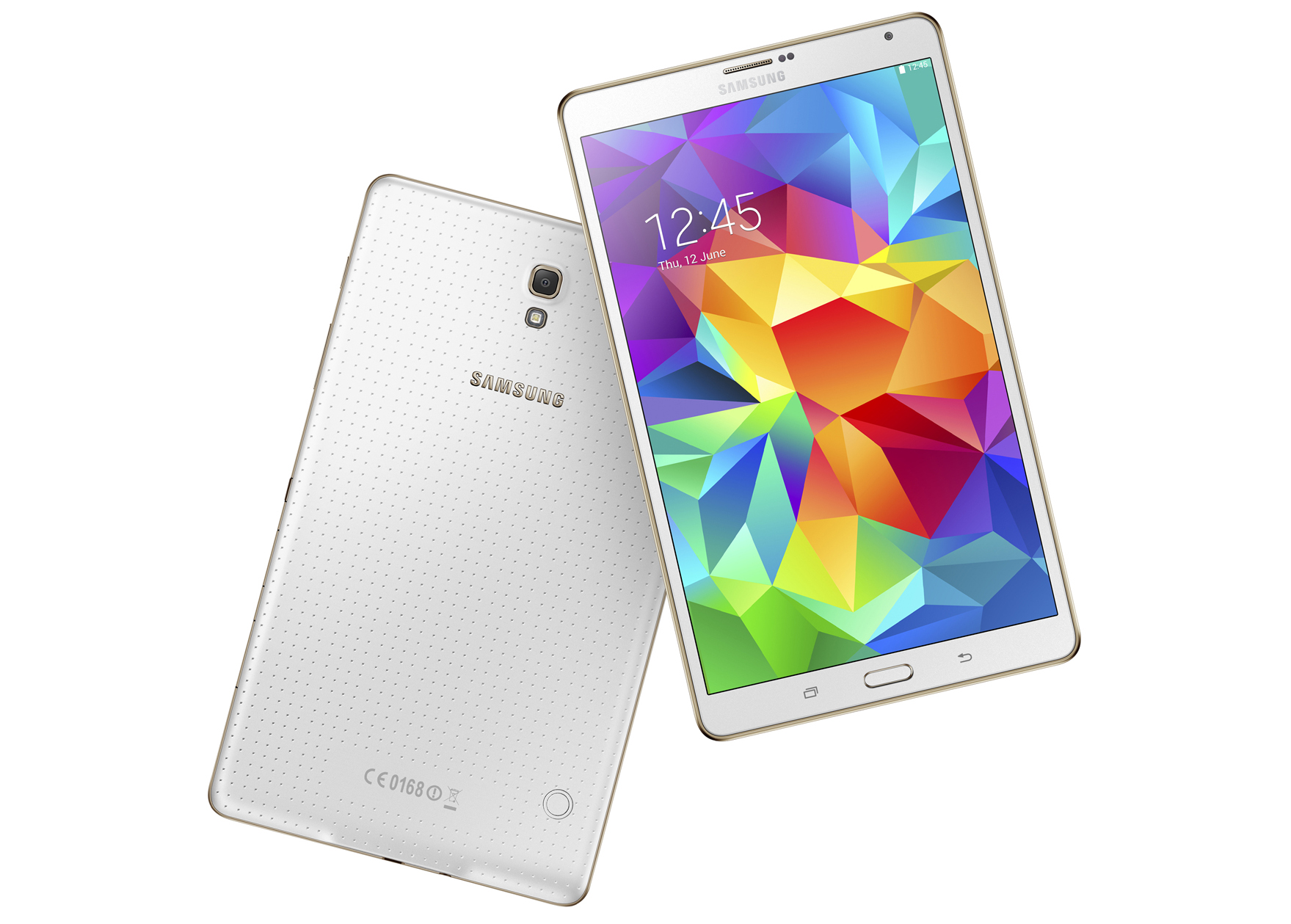 In terms of connectivity, the Galaxy Tab S supports fifth generation Wi-Fi 802.11ac and 2X2 MIMO, NFC, IR Blaster, GPS, GLONASS, WiFi Direct and Bluetooth 4.0 BLE / ANT+. MicroUSB 2.0 is being used for syncing and charging the tablet, instead of USB 3.0. The Galaxy Tab S packs a ton of sensors as well, which include: Accelerometer, Fingerprint Sensor, Gyro Sensor, Geomagnetic Sensor, Hall Sensor and an RGB Sensor. On the software side of things, the Galaxy Tab S comes with Android 4.4.2 KitKat and Samsung’s latest tablet Magazine UX out of the box. Additionally, Samsung has brought in a few software features from the Galaxy S5, like the Ultra-Power Saving Mode, Private Mode, Kids Mode and more. There are plenty of productivity features on the tablet, as well. For example, Users can make and receive calls directly from their phone to their Galaxy Tab S, anywhere at home, no matter where their phone is with the Call Forwarding feature via SideSync 3.0. The Galaxy Tab S also allows consumers to truly multitask, enabling them to surf the web, watch videos, share content and make calls simultaneously without having to worry about closing out of one to access another. With Quick Connect, Galaxy Tab S quickly finds and connects to nearby devices, for easy content sharing.

Samsung is known to bundle premium content with its high-end tablet devices, and the Galaxy Tab S is no exception. Samsung has teamed up with more than 30 of the world’s leading mobile content and service providers to offer its Galaxy Tab S users the ultimate home, work, and play entertainment experience through premium content and services across a wide range of industries. Some of these include: Kindle for Samsung, 3 months access of unlimited free membership to Marvel’s “Marvel Unlimited” app, Samsung’s new Papergarden magazine service, and more. Plus, Galaxy Tab S users will be able to enjoy Netflix in high definition.

Samsung has designed a few accessories for the Galaxy Tab S, as well. The Book Cover accessory configures to three different display angles to provide the most comfortable position to watch videos, read or type. For users looking for the same protective structure of the Book Cover but with a slimmer design, Samsung offers the Simple Cover that offers a perfectly fitting, lightweight protection. The Bluetooth Keyboard is a new, ergonomically designed ultra-slim keyboard designed specifically for the Galaxy Tab S which perfectly pairs the device with the keyboard with a clasp for better protection.

The Galaxy Tab S itself wasn’t the only thing Samsung was beaming about at its Galaxy Premiere 2014 event. The company was also proud to show its new accessories for the AMOLED display-toting tablets, introducing a new Book Cover, Simple Cover, and a Bluetooth Keyboard with special keys for Android/Galaxy-specific features. Like the tablets, we […]

Exclusive: Samsung Galaxy Tab S and its flip covers pictured in all their glory

Samsung is all set to introduce the Galaxy Tab S at its Galaxy Premiere 2014 event, which is going to be held at the Madison Square Garden in New York, in two days. Even though we have leaked the Galaxy Tab S numerous times, one thing which hasn’t been leaked yet are the new Flip Covers, […]

In about two days, Samsung will take the stage at the Madison Square Garden in New York to take the wraps off the Galaxy Tab S, a new tablet series that will feature AMOLED displays. Since not everyone can be live at the event, companies more often than not offer a live stream for everyone to […]

Samsung GALAXY Tab S (SM-T800) gets photographed by the FCC

Samsung’s upcoming GALAXY Tab S (SM-T800) makes an appearance in a set of new pictures, courtesy of the FCC. PhoneArena was the one who discovered these pictures in the FCC’s reports. However, we have already leaked the Galaxy Tab S in all its glory. Initially, leaking the device’s specifications and a few days later its […]

We are now in 2nd quarter of 2014 and Samsung has released 7 tablets, already. However, the Korean giant isn’t stopping just yet. Samsung has a brand new tablet lineup in the pipeline and its calling it the GALAXY Tab S. The Galaxy Tab S will come in two display sizes, 8.4-inch and 10.5-inch, and […]