Android 4.4.3 is said to be in works, and is expected to roll out for Nexus devices in the coming weeks. If you remember, a Samsung handset with SM-G906 model number was spotted on AnTuTu benchmark, said to be a variant of the Galaxy S5 Prime, running Android 4.4.3. Now, the upcoming version of Android has been spotted on Samsung’s developer website, which shows a workaround to solve issues with the ConsumerIrManager for devices running anything below Android 4.4.3. The details about Android 4.4.3 are pretty scarce at the moment, but it’s still a good thing to see that Samsung is cooking up the new update and could be the first manufacturer to roll it out to devices.

We’ll update you as soon as we get any information about the rollout of the new update for Samsung handsets. However, since Android 4.4.3 is expected to be mostly for bug fixes for Nexus devices, don’t expect to see anything noticeably new. 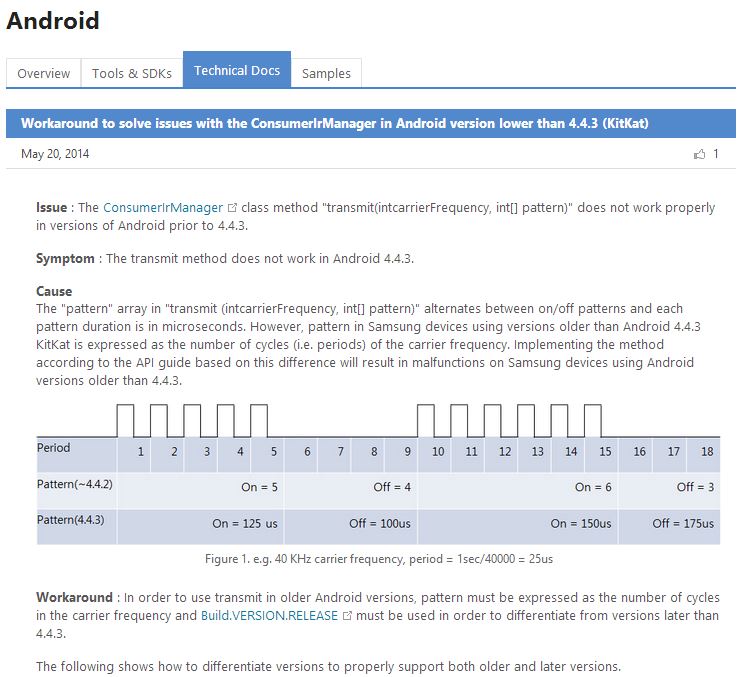 Google pushed the trigger on the Android 4.4.3 update yesterday, and it has already begun rolling out to the Google Play edition of the Galaxy S4 (GT-I9505G), the variant of Samsung’s 2013 flagship that runs a stock version Android. The update has started showing up on devices in the last couple of hours, and should […]

There’s a lot of stuff that happens in the tech industry, something that is especially true when it comes to giants like Samsung. If you missed out on some (or all) of what happened in the last 24 hours or so, well, here’s a recap of all the big things that went down. SamMobile published […]

Android 4.4 KitKat might have rolled out to quite a few Samsung devices already, but the update is yet to start making its way to most of the low-end and mid-range phones in the company’s lineup. We’ve heard that Samsung has been working on those updates and is also planning on bringing Android 4.4.3 to […]

There’s a lot of stuff that happens in the tech industry, something that is especially true when it comes to giants like Samsung. If you missed out on some (or all) of what happened in the last 24 hours or so, well, here’s a recap of all the big things that went down. The Galaxy […]

Well, it’s the sleepy start of a new week, and a new Samsung phone has managed to make an appearance in the wild to further distort the company’s already confusing lineup of upcoming devices. A Samsung SM-G906A has been listed in the AnTuTu benchmark database – SM-G906 has been associated with the Galaxy S5 Prime, […]