After launching the Galaxy Ace Style in Germany last week, Samsung has stated that the device will be available globally soon. The device is the first in the new Galaxy Ace line and is targeted at the mid-range segment, while boasting hardware that is clearly entry-level. The device features a 4-inch screen with a resolution of 800 x 480, 512 MB RAM, 4 GB internal memory, 5 MP camera at the back, VGA shooter at the front for “stunning pictures that are instantly shareable”, dual-core 1.2 GHz processor, Wi-Fi b/g/n, Bluetooth 4.0, NFC and a 1500 mAh battery.

While the hardware of the device isn’t stellar, Samsung states that the Ace Style is “designed to support and power young social consumers.” The device will likely be available in both single- and dual-SIM configurations and will come with Android 4.4 KitKat out of the box. The price hasn’t been officially announced yet, but it will likely be anywhere from $276 to $413 (200-300 EUR). 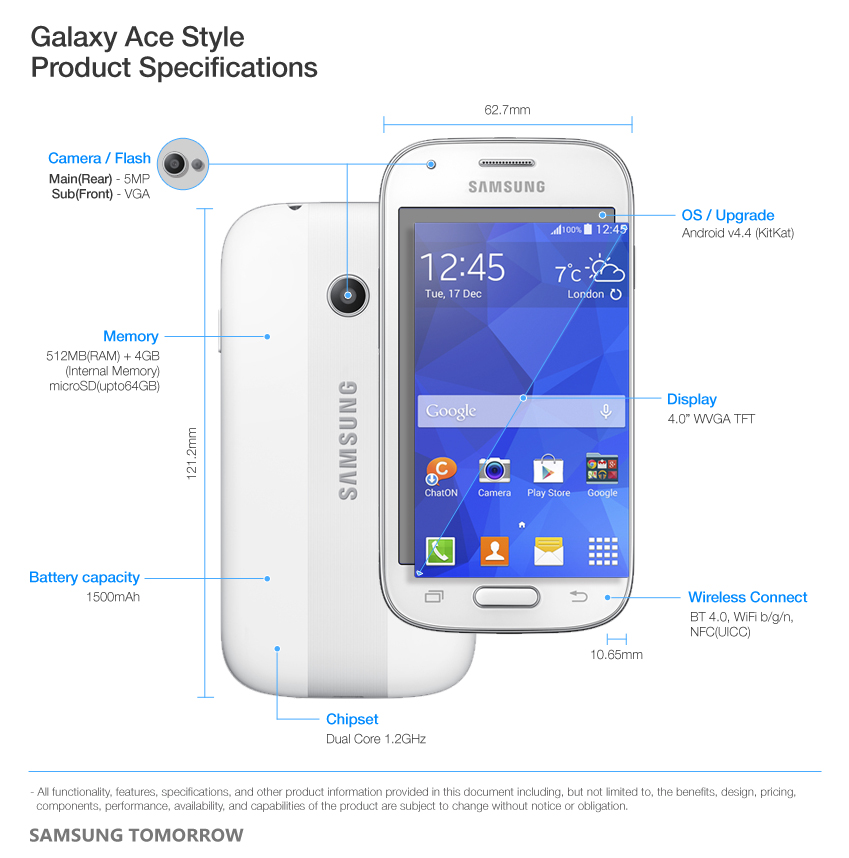 Samsung has been known to launch underwhelming handsets and selling them in huge numbers, but there has been a monumental shift in the entry-level segment over the last six months, mainly due to devices like the Moto G. For under $200, the Moto G offers a 720p screen, 1 GB RAM, 16 GB internal memory and a quad-core processor that can hold its own against devices like the Nexus 4. Even in countries like India, where Samsung has seen a lot of success with the Galaxy S Duos and the Galaxy Grand, the Moto G has been a runaway success. The Galaxy S Duos 2 launched a few months ahead of the Moto G, but failed to attract anywhere near the kind of attention its predecessor managed to achieve. It is therefore hard to imagine that a device like the Galaxy Ace Style would find traction, considering that the Moto G price is at around $200 for the 8 GB variant.

Samsung Galaxy Ace Style made official in Germany, brings KitKat to the low-end

The Galaxy Ace Style was initially discovered in a Samsung trademark application, and now, without much fanfare, the company has made the latest in its Galaxy Ace series of phones official. Unlike previous Galaxy Ace phones, the Ace Style (SM-G310HN) is firmly a low-end handset, though it has the honor of being one of the […]

In what could be the most serious case of overloading the market with a flurry of not-so-different smartphones, it looks like Samsung is preparing multiple new variants of the Galaxy Core and a new handset called the Galaxy Ace Style. The Korean manufacturer recently applied for trademarks on the names Galaxy Core Prima, Galaxy Core […]