Samsung unintentionally confirmed the existence of the Galaxy Tab 4 family of tablets recently, so it’s only a matter of time before the company makes them official. Today, the LTE variant of the 10-inch Galaxy Tab 4 (SM-T535) has taken a step closer to launch by getting certified by the FCC, with the FCC confirming LTE, Wi-Fi 802.11n, and Bluetooth support on the device. Meanwhile, the specs of both the 10-inch and 8-inch Galaxy Tab 4 have been revealed via benchmark site GFXBench, confirming most of what we already knew through previous leaks.

According to GFXBench, the 10-inch Galaxy Tab 4 will have a 10.6-inch screen, which is most likely a typo as 10.1-inch displays are pretty much the norm, and 10.6-inch would come dangerously close to entering the 12.2-inch tablet territory that Samsung created with the Galaxy TabPRO and NotePRO 12.2. Earlier, the Galaxy Tab 4 10.1 was expected to have an 8-megapixel camera, but the benchmark listing raises questions about that as well by listing a 3-megapixel camera – however, the rest of the specs fall in line with the ones from the previous leak, with a 1.2GHz Snapdragon 400 processor, 1.5GB of RAM, 16GB of internal storage, 1.2-megapixel front-facing camera, 1280×800 display resolution, and Android 4.4.2 KitKat.

The Galaxy Tab 4 8.0 (SM-T335) also made an appearance on GFXBench, and apart from the screen size, its specs are the same as those of the Galaxy Tab 4 10.1 (or 10.6, if you prefer). With so many details on the new tablets out in the wild, here’s hoping Samsung brings them to market as soon as possible, especially since the tablets released in 2014 until now are either at the extreme low-end of the spectrum or totally high-end, leaving the mid-range segment totally bereft of any up-to-date models. 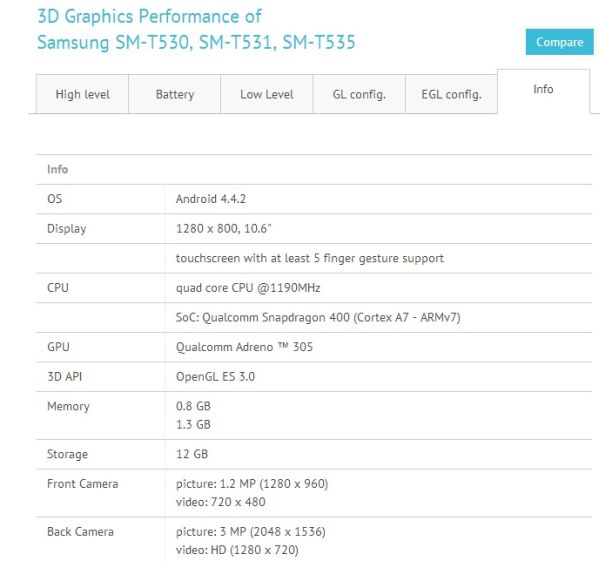