More Galaxy S5 model numbers are beginning to emerge on a daily basis now. Yesterday, SM-G900P was ousted as Sprint’s variant of the GalaxyS5, and today we have the SM-G900T, which will be T-Mobile’s Galaxy S5 model number. The model number was leaked through the User Agent profile on Samsung’s mobile site. The UA profile lists the screen resolution as 1920 x 1080, which is in contrast to the alleged box image that claimed a QHD resolution of 2560 x 1440.

It could be that Samsung might launch a variant of the Galaxy S5 with a QHD screen, which would be the mythical all-metallic device that we’ve heard so much about. The full-HD Galaxy S5, however, looks like it will be similar in design to the Galaxy S4, if leaked renders of its design are any indication. Fret not, as all will be revealed in a week’s time at the Mobile World Congress in Barcelona. 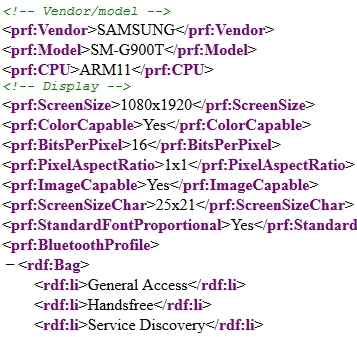