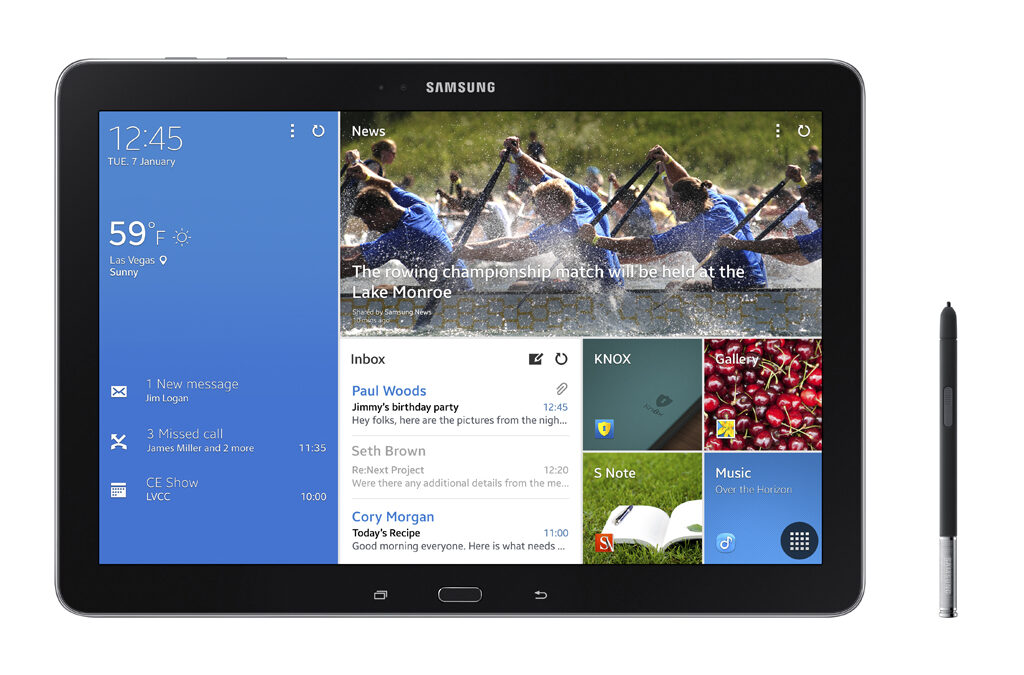 It was way back in August last year that we first heard rumblings of a 12-inch+ tablet that Samsung was apparently working on. Following numerous leaks and rumors, we were able to confirm that it would be a 12.2-inch tablet part of the Galaxy Note family, called the Galaxy Note PRO. Now, at its CES press conference, Samsung has officially taken the wraps off the 12.2-inch slate that it believes will create a new segment in the tablet market.

We already saw its specs leaked yesterday, and now they’ve been confirmed. The Galaxy Note PRO 12.2 sports a 12.2-inch screen of 2,560×1,600 resolution, the same as the Galaxy Note 10.1 2014 Edition. It will be made available in Wi-Fi and LTE variants, with the former powered by a 1.9GHz Exynos 5 Octa processor and the latter by a 2.3GHz quad-core Snapdragon 800 CPU.

The rest of the hardware is pretty similar to the Galaxy Note 10.1 2014 Edition as well – there’s 3 GB of RAM, 8-megapixel and 2-megapixel rear and front-cameras, 32/64 GB of storage (and a microSD slot), and a 9,500 mAh battery. Of course, since you’re talking about a Galaxy Note device, there’s an S Pen stylus included as well, which combined with the large screen will make for one of the most productive tablets you’ll find.

On the software front, the Galaxy Note PRO will run on Android 4.4 KitKat, which would make it the first Android tablet to come with the latest version of the OS out of the box.

Samsung some new features are: Magazine UX, Quad View, Hancom Office, Remote PC, Cisco WebEx Meetings, Samsung e-Meeting.
”Especially for heavy users the GALAXY NotePro and TabPRO series feature a rich palette of innovative applications to provide easy work.
So you can split the screen in two, three or even four windows using Quad View. It is possible to open an application in multiple windows and slide content from one window to another. A full format virtual keyboard gives the user plenty of room to type text with ease.
Moreover, the tablets feature Hancom Office, a mobile application for word processing making spreadsheets and presentations.
In addition, the NotePro features the S Pen, a tool that is more than just a stylus.It is pressure sensitive, accurate and provides access to additional applications, such as Action Memo, Scrapbook, Screen Write and S Finder. With the Pen Window you draw a window and after that you have instant access to unique in- application capabilities, such as YouTube or calculator.
Remote PC is another useful application for the business user. Through the NotePro and TabPRO it will give you access to your PC, so you can edit files remotely and saving them.
They are both high-end tablet with Cisco WebEx Meetings installed. With this tool for video conferencing, you can easily participate business meetings. You can start a session directly from your address book, a first for Android devices. Samsung e -Meeting lets you share documents during a meeting without being connected to a central server or IT network.”

Just a few days back AT&T released the much awaited Android 5.1.1 update for the Galaxy S6 and the Galaxy S6 edge, now it’s giving the same treatment to the Galaxy Note Pro 12.2 which has now received the aforementioned update. The tablet is being bumped up to Lollipop from KitKat so users will certainly […]

The Lollipop party continues for Samsung devices, with the Galaxy Note PRO 12.2 LTE the newest kid on the block to receive the confectionery update. Samsung’s largest Galaxy Note is being updated to Android 5.0.2 over in Switzerland as we write this, with the update carrying build number P905XXUABOD7. The update should include all the goodies […]

It seems there is no stopping Samsung. The company has been continuously pushing out Lollipop updates for various devices almost every other week, and it has now turned its focus to the Galaxy Note Pro 12.2. The LTE variant of the Note Pro 12.2 has started receiving the Lollipop update in Italy. The update is […]

Verizon is pushing out an update to the Galaxy Note PRO 12.2 to fix a few issues and make minor changes, while keeping the Android version at Android 4.4.2. The update brings a bug fix for the default Calendar app, improves stability for the Science and Technology sections of the Magazine UX, adds an option to […]