The recent announcement of the Galaxy Note 10.1 2014 Edition may have taken everyone’s minds off the rumored 12.2-inch Samsung tablet, but it looks like the Korean manufacturer isn’t letting down on getting the supersized tablet ready as soon as possible. A Samsung device with model number SM-P901 has recently passed Bluetooth certification, and previous rumors suggest it could be the Wi-Fi-only variant of that 12.2-inch slate.

The tablet is expected to be a member of the Note family, and was allegedly seen in a leaked picture a few days back. The Bluetooth filing doesn’t really confirm anything apart from the fact that the device will support Bluetooth 4.0, but we should see specs similar to the new Note 10.1, including the 2560×1600-pixel screen, octa-core processor, 3GB RAM, and improved S Pen. We’re sure more details will be revealed in the coming days, so hang tight all ye’ purveyors of inconvenient tablet screen sizes. 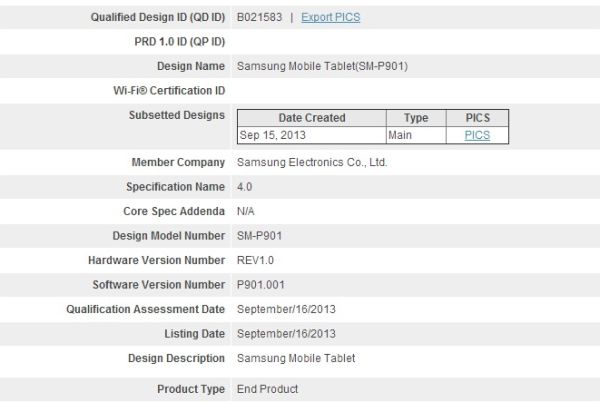