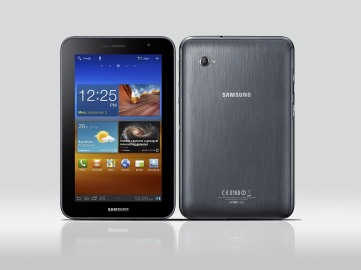 Well, the season of Android 4.2 updates to Samsung’s huge lineup of devices seems to finally be here, as just a day after the update started rolling out to the Galaxy S II Plus in Germany, Samsung is now treating the Galaxy Tab 2 7.0 (3G variant) to the newer (but not the latest anymore) flavour of Jelly Bean. The rollout has begun in France, with the build number P3100XXDMG6.

Android 4.2.2 brings a number of small but useful changes, such as a dedicated notifications panel in the status bar, lockscreen widgets, multiple user accounts, better accessibility, Daydreams screensaver mode, and also new widgets and launcher from the Galaxy S4. Expect to see improvements in performance and battery life as well.

It’s quite odd to see mid-range devices getting preference for the Android 4.2 update, though that does show Samsung isn’t giving as much special preference to their high-end device owners, and it confirms again and again that devices like the Galaxy S III and Note II will directly get updated to Android 4.3.

The update can be grabbed from Kies or via an over-the-air update on the device itself (Settings » About tablet » Software update), and you can also download the firmware from our firmware page to manually update (manual update can be done on any unlocked Tab 2 7.0 from any country, but outside France you may have to wipe data to make it boot up).

Verizon Galaxy Note 3 on sale for $199.99 as part of Black Friday deal

Here’s another nice Black Friday deal, this time from the largest carrier in the US. The Galaxy Note 3 is currently only $199.99 on a two-year contract from Verizon, a $100 discount on the usually steep $299 price tag; an outright purchase will cost you $599. If a phablet isn’t your thing, then Verizon also […]

Samsung has begun rolling out the Android 4.2.2 update (XXDMJ1) for the Wi-Fi variant of the Galaxy Tab 2 10.1 in Germany. Apart from the usual changes and improvements that come as part and parcel of Android 4.2.2, including lockscreen widgets, Daydream screensaver mode, dedicated toggles page in the status bar, and more, the update includes stability […]

Looking for an Android tablet from Samsung? If yes, then you might want to head over to Woot.com (an Amazon subsidiary), where you can grab a major discount on a couple of refurbished Samsung tablets in every display size. The list includes the Galaxy Tab 3 10.1 with Book Cover for $299.99, Galaxy Tab 2 […]

Could the Galaxy S2 still get Android 4.2?

By now, it’s become pretty clear that chances of the Galaxy S2 (and Galaxy Note) getting updated to Android 4.2 are slim to none. Our insiders said the device has reached end of support, and later Australian carrier Telstra confirmed that the update won’t be coming, at least on the 4G variant of the device. […]

We had confirmed earlier on our Twitter account that the Galaxy S II and Note wouldn’t be getting any more updates after Android 4.1, and while Samsung hasn’t officially said anything, Telstra might just have confirmed the disappointing news for every Galaxy S II owner out there. According to a Telstra rep, “Samsung have confirmed […]

At long last, the Wi-Fi-only variant of the Galaxy Note 8.0 is beginning to receive the Android 4.2.2 update, almost two months after the 3G and LTE variants were updated. The update was reportedly making its way sporadically to a few users over the last few weeks, but it seems the rollout has started gathering […]