Despite the backlash that it received due to its controversial privacy policy, WhatsApp continues to dominate the instant messaging space. Its ability to back up chats to Google Drive/iCloud can come in handy while switching devices. A future version of WhatsApp will let you set a limit on your backup size.

WABetaInfo stumbled upon the feature in WhatsApp version 2.21.21.7 for Android. The new ‘Manage Chat Backup’ button will let you determine how large you want your Google Drive backup to be. It also lets you determine the parts to back up, allowing you to cut out heavy bits like videos and keep pictures, documents, etc. 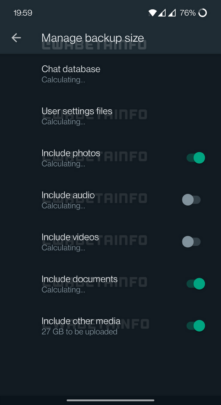 WhatsApp’ decision to test the feature might seem random, but there could be some method to the madness. Currently, WhatsApp backups do not count against your Google Drive storage quota, but that could change in the future, where anything over 2GB will be counted. The new feature could begin rolling out at about the same time, allowing users to conserve their precious storage.

As mentioned earlier, the ability to manage your backup sizes on WhatsApp for Android is still under testing. There is no telling when regular users will be able to access it. However, we can expect it to debut on Android and iOS together, as the feature would come in handy to Apple users as well. We’d like to see multi-device support roll out first, though.

More reviews
X
You are going to send email to