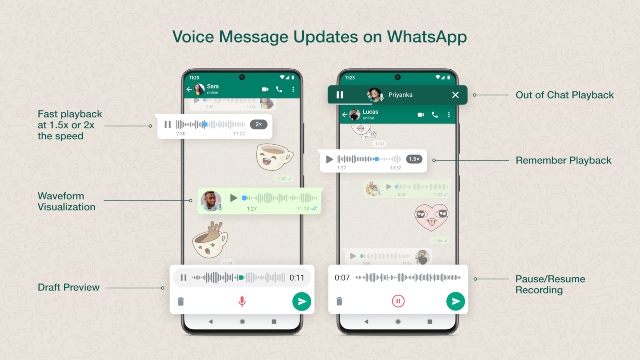 On Wednesday, WhatsApp announced that it is bringing a bunch of new features to voice messages. These features will make it easier for users to make use of voice messages and communicate with their contacts on WhatsApp.

The update includes the ability to pause or resume voice message recordings, waveform visualization of voice messages, out-of-chat playback, and draft preview (the last one was already available to some users).

Speaking of the out-of-chat playback feature, it lets you listen to the voice message outside of the chat it was sent in. This would allow users to respond to other chat messages on WhatsApp.

However, do note that the voice message will stop playing if you leave the WhatsApp app or switch over to a different application. Also, you will be able to pause or resume voice messages. This is a pretty handy tool that lets you resume your recording in case you were interrupted in between.

Last but not the least, there is a resume playback option, which allows the users to start listening to the voice message from where they left off.

There is no exact date mentioned as to when Samsung and other Android users will get these features. But WhatsApp says that these updates will roll out in the next few weeks.

In the recent past, WhatsApp has received a slew of new features. The company may not be as far ahead in terms of features as its competitors, such as Telegram, but it is working hard to meet the needs. Reportedly, a new WhatsApp feature is in the works, that would allow users to keep the […]

According to a new report from WABetaInfo, the upcoming version of WhatsApp will allow people to transfer their WhatsApp data from one Android device to another Android device using a local network (either through Wi-Fi or Wi-Fi Direct). This feature will eliminate the need for Google Drive, which means people will no longer have to […]