Samsung’s tablet market share improved in Q1 2020 while the industry as a whole crumbled under the pressure of recent developments. Preliminary data puts the company’s quarterly shipments at 4.7 million, almost unchanged compared to the same three-month period in 2019. As a result, that minor 2% decline is a win in the context of a quarter that erased 12% of the global tablet market’s value.

Perhaps more importantly for Samsung, its latest achievement comes at a time when its closest rival in the segment saw a catastrophic drop-off. The coronavirus pandemic hence eliminated 15% of Huawei’s shipments, furthering its gap from Samsung.

Tablets are dying but Samsung didn’t get the memo

As reported by Strategy Analytics, Samsung’s now estimated to hold 14.6% of the slate segment by worldwide shipments, a 1.4-point improvement compared to the same period last year. Naturally, Apple is still the definitive market leader in nearly every respect as iPads remain the world’s most popular tablet series. The research firm’s medium-term predictions for the industry, including those concerning Samsung, are a mixed bag. Regarding Q2 2020 in particular, it appears the increasing global focus on working from home may actually benefit some tablet suppliers. The market as a whole should still continue declining in the long term, especially as foldable smartphones begin maturing, doing everything tablets can but better by virtue of the fact they can fit in one’s pocket when needed.

These latest analyst estimates are arguably even better news for Samsung than its Q1 2020 smartphone performance is. In short, while the ongoing global pandemic is certainly taking its toll on countless markets, particularly non-essential and already declining ones, Samsung is doing a better job than most with how it’s been handling the crisis so far. As for its tablet business in particular, the firm is now turning its focus toward the Galaxy Tab S7 series expected to launch in the second half of the year. 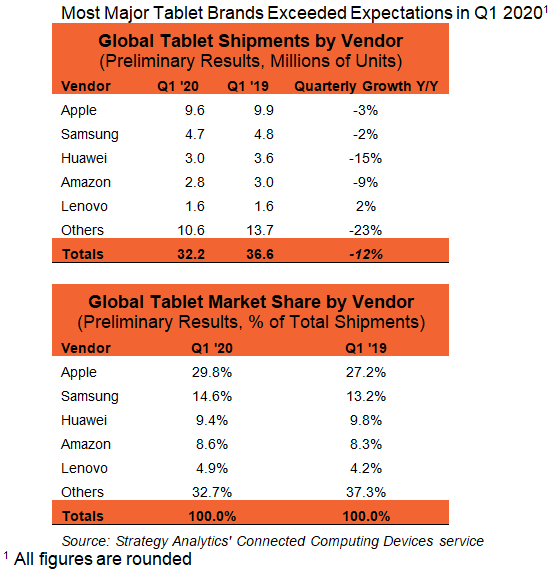