Samsung’s LED display technology is now beating at the heart of the SoFi Stadium, the latter of which has become the world’s first stadium to feature 4K end-to-end video production. Samsung has been recognized as the Official Mobile, TV and Display partner of the 300-acre Hollywood Park located in Los Angeles, USA, and the inclusive SoFi Stadium now features a 70,000 square-foot dual-sided center-hung videoboard that was built exclusively using Samsung’s outdoor LED solutions.

The SoFi Stadium state-of-the-art videoboard is the largest LED content playback system ever deployed. Its largest LED panel is about 40 feet tall, while the smallest panels have a height of approximately 20 feet. The entire videoboard comprises nearly 80 million pixels, but of course, pixel density is on an industrial scale.

According to Samsung, each one of the 80 million pixels are separated by an 8-millimeter gap from center to center. The videoboard frame also features over 260 individual speakers connected by more than seven miles of loudspeaker cable.

The videoboard adorning the SoFi Stadium is undoubtedly the more impressive piece of technology that was created following this newfound partnership with Samsung and its subsidiary Samsung Display.

However, the Korean tech giant’s LED display technology will also be used outside of SoFi Stadium and throughout the Hollywood Park’s different districts including the residential, office, and retail areas.

In addition, Samsung Members residing or visiting Hollywood Park will have access to a dedicated in-app section where they can take advantage of exclusive content, offers, and in-stadium discounts. 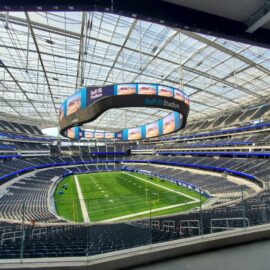 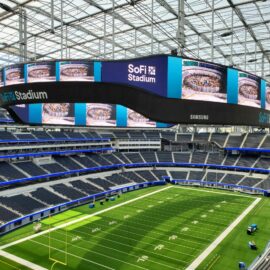