Samsung is the world’s top smartphone vendor so it’s not surprising to see that it had the most Android devices on the list of top 10 smartphones in 2019. The latest data from two different market research firms show that the company saw significant interested in its Galaxy A series handsets.

This has been quite evident from the way the Galaxy A series was received. Samsung had overhauled the entire lineup with the express purpose of having a better chance competing against its Chinese rivals in key markets like India. It looks like the strategy has worked.

Samsung is the dominant Android OEM on the list

Research firm Canalys has released its list of the top 10 smartphones in 2019. The graph is based on sell-in units estimated by the firm. Apple captured the top two spots with the iPhone XR and the iPhone 11. Since Apple sells fewer models than its Android competitors, it’s normal for its models to come out on top of these lists. 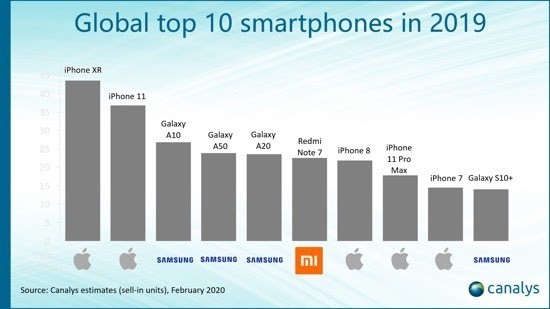 As far as Android manufacturers are concerned, Samsung was the one to beat. The Galaxy A10 came in third place overall and was the best selling Android phone of 2019. Given its entry-level specs, it’s safe to say that the majority of the people who bought it were either heavily price-sensitive or first-time smartphone buyers. That’s exactly the demographic that Samsung wanted to target with the device.

The Galaxy A50 and Galaxy A20 took the fourth and fifth spots respectively. The Galaxy A50 was one of Samsung’s best-performing phones last year so its position here is well-deserved. Only one Samsung flagship, the Galaxy S10+, made it on the list in 10th place. Xiaomi was the only other Android OEM to have a device on this list. 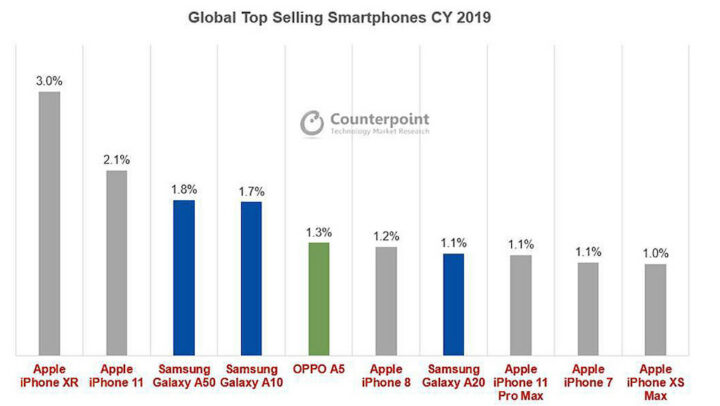 Counterpoint Research’s data paints a slightly different picture. Samsung does occupy the third place on the list but with the Galaxy A50. The Galaxy A10 comes fourth while the Galaxy A20 is able to secure the seventh place. Once again, Samsung is the dominant Android manufacturer here, with Oppo being the only other one in fifth place. 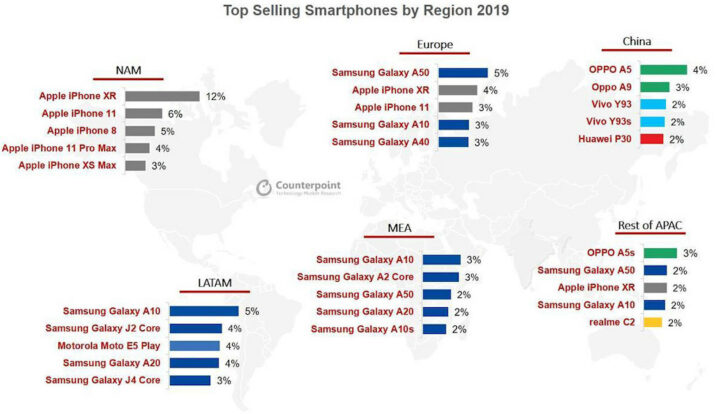 The bet that Samsung made by revamping the entire Galaxy A series has evidently paid off. It has since launched the Galaxy A51, which now has the reponsibility of taking this momentum forward. It certainly seems up to the task but we’ll have to wait until next year to see if it was able to do that. If Samsung sticks to its guns, there’s no denying that it may once again be the dominant Android OEM in next year’s list of top 10 smartphones in 2020.