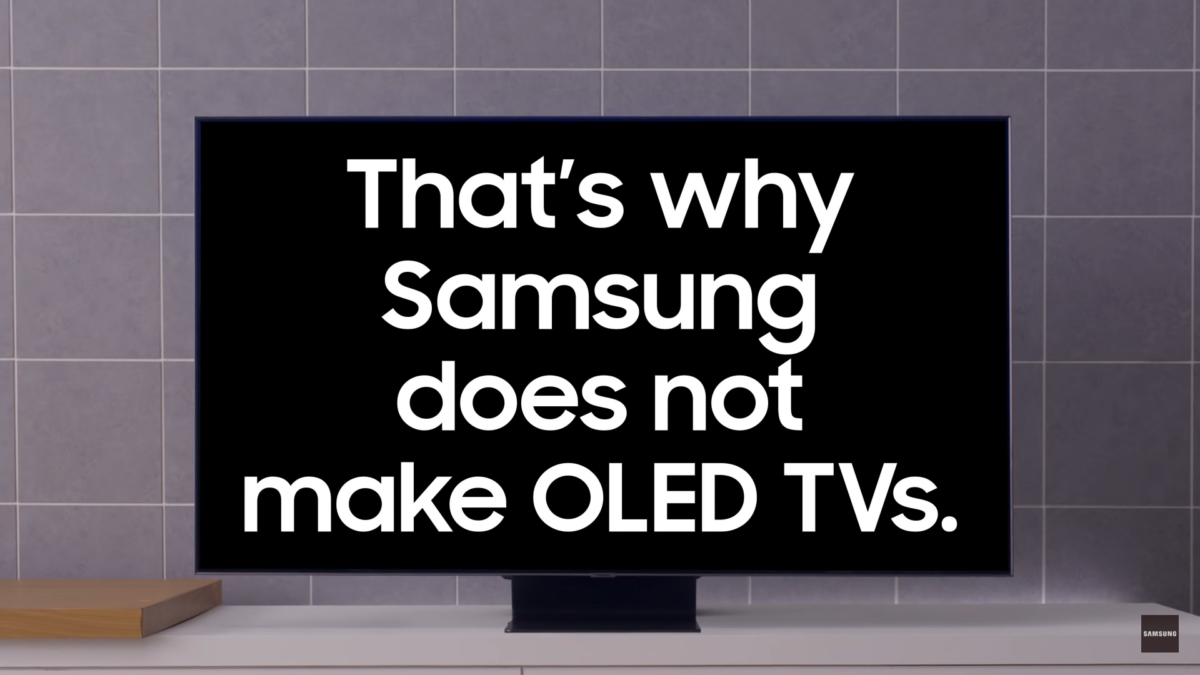 Samsung has launched a direct attack on LG’s OLED TVs in a new video posted on its YouTube channel. Though the company went after LG’s TV offerings in the past as well, the latest video seems to be its most no-holds-barred attack so far. The criticism of LG’s OLED TVs is so strong here that the video actually comes across as a bit desperate on Samsung’s part.

In the video titled Why do people choose QLED TV over OLED TV?, Samsung shows a lot of test results that prove its QLED TVs are superior to LG’s OLED TVs in a variety of areas. The company says its QLED TVs are brighter, more detailed, have richer colors, offer better viewing angles, and don’t suffer from burn-in issues. Samsung goes on to state that it is the top-selling TV brand for 13 consecutive years and that it has decided not to make OLED TVs for a reason.

While we are not qualified to pass any judgement on the validity of the technical details Samsung quotes in the video, we are aware of companies often cherry-picking tests and testing conditions to get the desired results. Even if some of Samsung’s arguments against OLED TVs are on point, it is safe to presume that the company is overselling the disadvantages of rival TV offerings.

Moreover, the fact that it has decided to target LG’s products by name instead of opting for a generic attack on OLED TVs ends up being an indirect and unintentional endorsement of the Korean rival’s TV lineup. Unlike in the smartphone space, LG has emerged as a strong competitor to Samsung in the premium TV segment in recent years with its OLED TVs that are well received by the market.

Whatever Apple does with its iPhones (no matter how absurd it is) becomes a trend. Apple wowed its users by introducing the Dynamic Island with the iPhone 14 Pro lineup, which, to be honest, is just another ugly way to get rid of the uglier bathtub notch. Personal preferences aside, as per the latest report […]

According to TheElec, Apple has started working on a MacBook with a 20-inch foldable screen. The company will use a 20.25-inch OLED display, with the display made by an unknown South Korean supplier. While there are multiple South Korean display suppliers, with the expertise Samsung has in making foldable devices and displays, you cannot rule […]

Samsung to increase investment in Vietnam to $20 billion this year

Over the past few years, Vietnam has emerged as Samsung’s key production site. And shortly after South Korea and Vietnam announced their plans to build a “comprehensive strategic partnership” earlier this week, news surfaced on a new multi-billion dollar investment by Samsung. Likewise, LG intends to increase its investment in the country. Even though Samsung […]