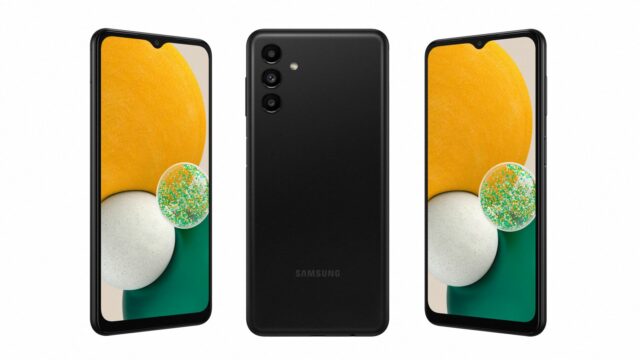 The Galaxy A13 5G leaked through an AT&T video earlier today, and it turns out that Samsung wasn’t far behind with an official announcement. The Galaxy A13 5G is now official in the United States and will be available for purchase from AT&T in a couple of days. Samsung announced that T-Mobile also picked up the Galaxy A13 5G, though Magenta won’t offer the phone before January.

The unlocked Galaxy A13 5G will be available in the United States for $249.99. It’s a budget phone but has a few attractive features for the price point, such as a 90Hz adaptive LCD panel. It has a 6.5-inch diagonal and a resolution of 1,600 by 720 pixels.

The Galaxy A13 5G is equipped with the MediaTek Dimensity 700 chipset featuring eight CPU cores, 4GB of RAM, and 64GB of built-in storage expandable via microSD.

The back of the phone accommodates a triple camera setup featuring a 50MP (f/1.8) main sensor, and a couple of 2MP (f/2.4) macro and depth shooters. The selfie camera clocks in at 5MP and an f/2.0 aperture.

The Galaxy A13 5G is powered by a 5,000mAh battery with 15W charging and takes advantage of NFC for Samsung Pay. It’s equipped with a side-mounted fingerprint scanner, a single speaker, and a 3.5mm audio port. The device supports 5G Sub 6 and Wi-Fi 802.11 a/b/g/n/ac. It ships with Android 11 out of the box.

Samsung will offer an even cheaper smartphone to customers in the USA who might be looking for a solid budget solution, i.e., the Galaxy A03s. It will be available from AT&T, T-Mobile, Verizon, and Samsung’s online shop beginning January for $159, making it the cheapest Galaxy A smartphone in the USA.

The Galaxy A03s debuted in India in August. It has a 6.5-inch PLS LCD HD+ panel locked at 60Hz, and it’s powered by the MediaTek Helio P35 chipset along with 3GB/4GB of RAM. It, too, has a side-mounted fingerprint scanner, a 5,000mAh battery with 15W charging, and a triple camera setup — though with a higher resolutions main sensor.

Both the Galaxy A13 5G and A03s will play an important role in keeping the Samsung brand relevant at all price points in the United States. The company will unveil the more powerful Galaxy S21 FE in January and is expected to follow up with the Galaxy S22 series in February 2022.