Samsung’s Gear IconX (2018) earbuds are getting a software update

Samsung has just announced that the Gear IconX (2018), the second iteration of its fitness tracking-enabled wireless earbuds, is getting a major software update today. The IconX update comes a few days after Samsung released updates for some of its smartwatches and fitness trackers, and it includes both new features and improvements to existing ones.

The new features include an equalizer setting, which allows users to select from five different presets (Bass Boost, Soft, Dynamic, Clear and Treble Boost) and should give IconX users with non-Samsung phones the ability to customize the audio quality. The Ambient Sound mode feature is more customizable as well thanks to the update. Users can now decide the amount of ambient sound that they wish to hear when they’re wearing the IconX, and a separate toggle will make the earbuds focus on human voices (for those unaware, Ambient Sound mode makes it possible to hear the outside world when you’re using the IconX to play music or other media). 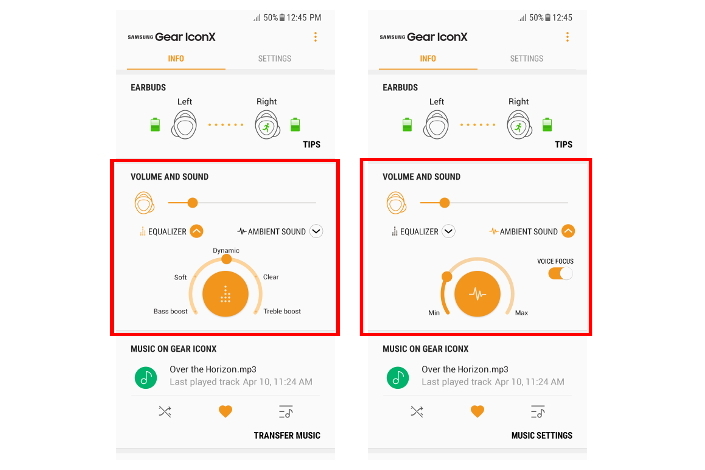 Samsung has also added the ability to transfer music tracks to the IconX over Bluetooth. Naturally, Bluetooth transfer can be time-consuming, especially if you decide to send across hundreds of music files to fill up the 4GB of built-in storage on the IconX (2018), but it’s still a good feature to have as you can’t always have the necessary cables available to use wired data transfer.

The Gear IconX (2018) update is available now and can be downloaded from the Samsung Gear app on a connected phone (from the About Gear » Update Gear software menu in the Settings tab). The Samsung Gear app itself will need to be updated first, and you’ll get a notification to update to the latest version when you open the app.

Samsung is rolling out a new firmware update for the Gear IconX (2018) today. It’s a minor update that b …

Samsung uploaded a couple of videos to its YouTube channel on Monday, demonstrating the quickest (and easiest) …