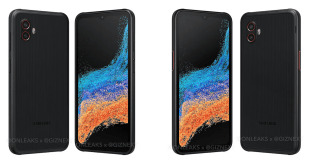 Samsung has been working on a couple of rugged products that it’s going to launch next month. The company has confirmed in an email to its partners an online event for the Galaxy XCover 6 Pro and the Galaxy Tab Active 4 Pro.

This online event is going to take place on July 13. Samsung will finally be launching these new rugged products that we’ve been hearing rumors about for weeks.

Earlier this week, the Galaxy XCover 6 Pro was fully revealed in leaked renders. This 5G-enabled device will have a solid build quality. Its design is utilitarian with a verticle stripe pattern on the back panel. While Samsung doesn’t ship removable batteries with its smartphones anymore, it continues to make an exception for rugged devices.

The Galaxy XCover 6 Pro will also have a swappable battery. There’s also a dual-camera setup at the back. The swappable battery makes sense for this product. This is primarily meant to be used on project sites and industrial environments. Users can quickly swap out the batteries without any disruption to their work.

The Galaxy Tab Active 4 Pro will be a rugged tablet that’s also meant for users in the aforementioned environments. While it’s not going to have a removable battery, it’s going to offer plenty of protection against bumps and drops. The tablet comes with an S Pen, a tool that’s going to be quite useful for the target demographic.

Samsung will reveal the full details about the Galaxy XCover 6 Pro and the Galaxy Tab Active 4 Pro at its invite-only online event on July 13. Samsung remains one of the very few mobile manufacturers that develop rugged devices. The company launched the Galaxy XCover 6 Pro in the United States recently, giving business and non-enterprise customers a new option in the way of mobile devices with military-grade protection. Now someone took this device apart to let us see how exactly Samsung’s […]