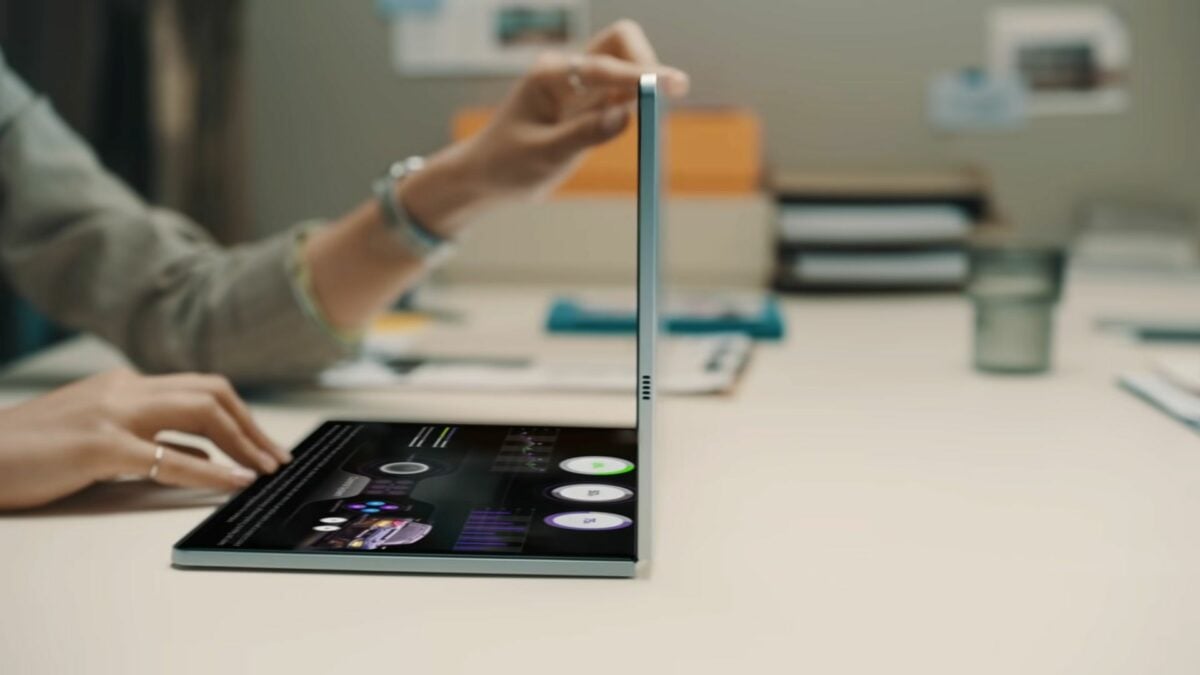 Some say that 2023 will be the year of foldable smartphones and notebooks. Samsung’s plans for next year are not entirely clear, but what is certain from Samsung Display’s previous demonstrations is that the company has experimented with foldable display technology applied to various form factors, including laptops. Now it seems that the company has been granted another patent concerning one foldable laptop design.

The foldable laptop in question is precisely that: a notebook with a large foldable screen that can bend down the middle, similar to the Galaxy Z Fold 4 when used sideways in Flex Mode. The lower portion of the screen can accommodate a virtual keyboard and trackpad, while the upper, vertical half of the foldable display is reserved for showing content. (via 91mobiles)

This could be the same Galaxy Book Fold 17 concept

There’s a striking similarity between this patented concept design and the Galaxy Book Fold 17 showcased by Samsung at SID 2021. However, this patented design also appears to have a narrower aspect ratio than the Book Fold 17, which makes it look more like an oversized Galaxy Z Fold 4. Either way, it’s worth noting that the patent was reportedly published this week but filed a couple of years ago. Therefore, it’s an idea that Samsung has had for at least a couple of years.

Nevertheless, it’s worth reiterating that a patent application doesn’t guarantee that the idea will come to fruition through a commercial device. This patent may be Samsung’s way of securing its ideas and preventing rival companies from stealing them.

As for the concept of a foldable laptop, this design benefits flexibility, figuratively. The lower display half of such a device could transform into almost any tool, from virtual keyboards to other types of input devices, color wheels for photo editing apps, and buttons and knobs for music-creation software.

It’s a neat idea, but whether or not it can be practical is up for debate. Apple tried something similar with its MacBook touch bars, albeit to a much-limited degree, but eventually gave up, realizing that physical function keys and button shortcuts are more useful and practical for professional users.

Nevertheless, Samsung may want to demonstrate that it can apply its state-of-the-art foldable display technology across more form factors, except perhaps rollable smartphones, so a laptop might be next. We’ll have to wait and see what 2023 has in store for us.

All eyes are now on Samsung’s next flagship smartphone launch. There have already been countless rumors and reports concerning the Galaxy S23 series. It was already expected that the launch will take place in early 2023. A new report now provides some additional insight. Samsung is reportedly going to conduct a full-fledged Unpacked event for […]