We’re less than a month away from Samsung’s Unpacked event on February 11 where it will unveil the Galaxy S20. More than a few reports now have backed up the theory that the Galaxy S11 is actually going to launch as the Galaxy S20. 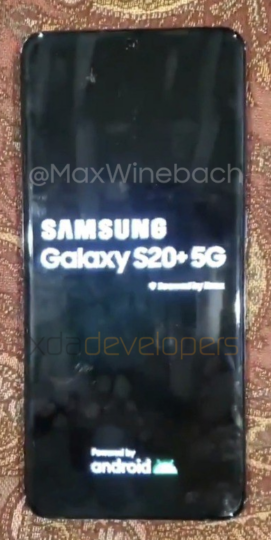 From what we know about the Galaxy S20 so far, the Galaxy S20+ will likely feature a 6.7-inch display. It will most certainly be an Infinity-O panel with a centered punch hole for the front camera. The Galaxy S20 Ultra may have a 6.9-inch display. We have already confirmed that the panel will have a super smooth 120Hz refresh rate. 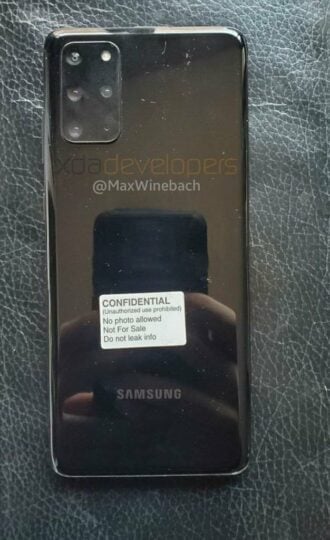 The images that were leaked online today by XDA Developers appear to show a Galaxy S20+ 5G booting up. We also get a picture of the back with a rather ironic sticker cautioning against leaking information. As expected, the Galaxy S20 will end a signature Samsung design element by opting for a vertical placement of the camera setup.

The handset appears to have a quad-camera system at the back with a ToF sensor and flash. The accompanying report suggests that the Galaxy S20+ will come with a new 12MP 1.8μm primary sensor, which means that Samsung’s 108MP sensor might only be available on the Galaxy S20 Ultra. The camera setup will also include an ultra-wide, telephoto and possibly a macro camera as well.

There’s nothing really shocking about the Galaxy S20’s design. It appears to be quite similar to the renders leaked previously. However, the source quoted in this report claims that the Infinity-O display feels less curved than before, almost flat even. A presumption is drawn that Samsung may have used 2.5D glass instead of its curved glass. That’s not something that will make a huge difference for most customers, though. 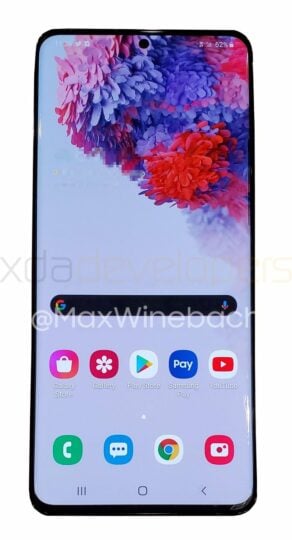 The US is reportedly set to get only 5G variants of the next flagship while the 4G variant will be offered in other markets. Samsung will officially unveil the Galaxy S20 at its Unpacked event on February 11. We’ll be on the ground in San Francisco to bring you all of the latest developments from the event.

I was really ready to buy new s11/20 only for 108 m. Sensor camera, but now I see that only s20 ultra will be equipped with such option and probably exactly this model will be expensive as hell. At the moment my s10 works perfectly and I think that I will wait until s12/21.

Hopefully if no 3.5mm audio Jack present in S20+ will Samsung finally fix bug which is in S10+ as can’t make phone call when my Wear OS watches connected together to phone with Galaxy Buds. When I call to someone it’s always reconnecting active call from Buds to Wear OS Watches or even to S10+. This issue is present since S10+ released and still not fixed. Therefore for business calls need to use wired headset and Buds only for sports (where are awesome). Can’t imagine to have this bug present and not 3.5mm jack anymore. Instead of removing 3.5mm should… Read more »

I think I will keep my s10 this year and wait for the s12. Not sure I m happy about the increase size and also the exynos is surely lacking compared to the SD

Not curved screen WILL make a huge difference …

Where is Heart and Blood Pressure sensor?

As someone has written here, the transition from S10 + has no value at all.

No, not a big change to replace my phone 😀looks like s9-s10 serie. With smaller chins and bezels only

It looks nice enough for me, although I would prefer a folderable one instead BUT one that works fine (let’s say 3rd or 4th generation) and it is not such pricy. I will buy it but not right away, I will wait few months to let its price goes down a bit.

Nope. It’s still a big nope from me. The centred hole remains as horrible and obtrusive as a notch (just like it already is on the Note line) and demands an immediate turning on of the virtual bezel. Then there’s the Huawei-esque camera set up on the back that throws in the litter bin the remnants of Samsung’s once good designs. Specially when instead of a thicker device they go for a huge hump. So much BS spat about “removing the headphone jack to put in more battery” and then they don’t do the obvious and eliminate the hump in… Read more »

Get yourself some galaxy buds. You you wont need a headphone jack then.

I rather keep using my vastly superior Sony XM3’s with their wire and enjoy the better sound quality, no latency and no need to be worried about charging yet another device. Thanks.

Ah I used to be like you, headphones are superior, the punch hole display, etc. Until I got my S10+ with free Galaxy buds. You will never ever feel that the hole on the top exists, not once did it ever obstruct my viewing experience, most of the YouTube videos if not all of them don’t support the current S10 aspect ratio anyways. And regarding the headphone jack, the S10+ has one, and I have the buds like I said before, and I have never used any headphones on my phone ever since. Battery life is fantastic, and charging the… Read more »

I agree with you, the hole on the s10 or s10 plus doesnt bother me because its to the side.
In the note 10 and the upcoming s20, the hole is in the center which does bother me, and kept me from buying the note 10.

The galaxy buds are useless and in general all wireless Bluetooth headset has the big lag fault. It’s impossible to play games or watch movies with out it being ruined with the out of sync issue