We’re just days away from Samsung’s February 11 Unpacked event in San Francisco where the company will unveil the Galaxy S20 lineup and the Galaxy Z Flip. There’s a lot of excitement for its new foldable smartphone and there have been significant leaks recently which have given us a pretty good look at the device.

Since clearly secrecy is not a priority for the Galaxy Z Flip, we’re now seeing a lot more of the device. This Galaxy Z Flip Joker & Harley Quinn edition, though, isn’t something that we’ll be seeing at Unpacked.

That’s because this isn’t some promotional tie-up between Samsung and DC Comics. The Galaxy Z Flip Joker & Harley Quinn edition is a third-party creation. It’s made by Caviar, a Russian boutique firm known for its ostentatious treatment of mobile devices. One such example is its $58,000 Galaxy Note 9 Fine Gold Edition which had a back panel that contained an actual one kilogram of pure gold.

Leveraging the Galaxy Z Flip’s clamshell form factor, Caviar has adorned it with a gold-plated back with colorful images of both the Joker and Harley Quinn. There’s embossed engraving all around in the form of card suits. Caviar will only be selling 54 units of this $5,210 Galaxy Z Flip, a nod to the number of playing cards in a conventional joker deck. It’s accepting pre-orders already through its website.

Caviar has rather smartly listed their limited edition device just a day before Birds of Prey (new Harley Quinn movie) opens in cinemas across the globe, apparently, it doesn’t really matter to the company that the underlying device itself has still not been officially announced by Samsung.

Raise your hand if you want to buy this personification of having more money than you know what to do with. No one? Okay. 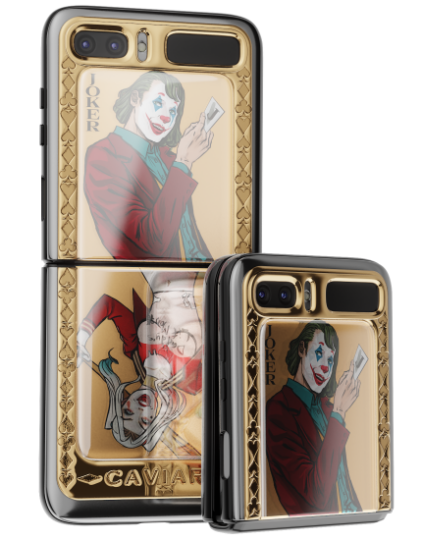 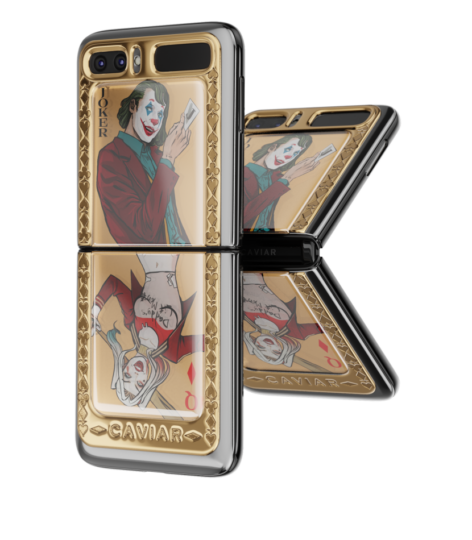