Galaxy S10 finally gets dedicated camera Night mode in the US

Galaxy S10 owners in the US can finally start taking better night-time pictures with a dedicated Night mode in the camera app, at least if they are using the device on AT&T’s network. AT&T has released the June security update for the Galaxy S10e, Galaxy S10, and Galaxy S10+, and the update includes the new Night mode and the QR scanner feature.

Verizon has also released the June update with the same software version (G97xUSQU2ASF6) as AT&T, so it’s possible both carriers have implemented the new camera features. However, we can’t be sure at this time as screenshots confirming the new camera functionality are only available from AT&T-locked devices. T-Mobile, meanwhile, released the June update with a newer software version than AT&T and Verizon but without the camera features, and one can only hope the ‘Uncarrier’ will fix that with the July security update.

After all, the dedicated Night mode is very useful in tough low-light conditions, and those in the US are likely growing frustrated with all the waiting that stateside carriers are making them endure. The QR code scanner is also an excellent addition. You no longer need to use Bixby Vision to scan QR codes using the phone’s camera app – simply aim the camera at a QR code and the link or data contained within the code will pop up above the shutter button.

AT&T is rolling out the new update for all three Galaxy S10 devices over the air. You should be able to download the update from the Settings » Software update menu on your phone. As always, the rollout may not be available for every user right away as updates are released in stages. Simply check at a later time if you don’t see the update show up on your Galaxy S10 right away. 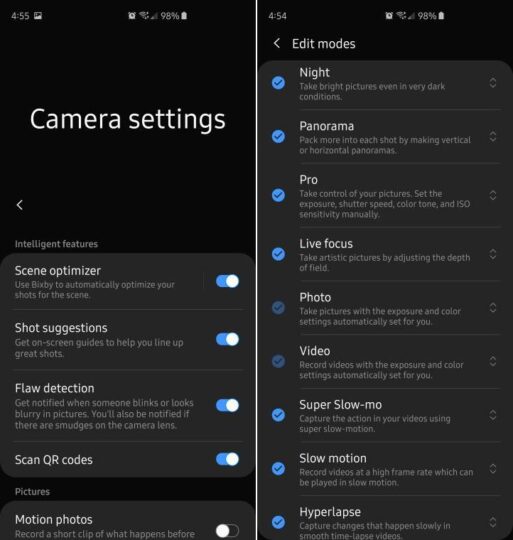