Galaxy A70s is official, will launch in India tomorrow for $412

The Galaxy A70s has been officially introduced by Samsung India today, and the device will go on sale tomorrow, September 28, for the starting price of Rs. 28,999 ($412). In many ways, the Galaxy A70s is similar to the original Galaxy A70 model launched earlier this year. In other areas, such as the camera setup, the A70s outshines its close sibling despite the launch prices between the two models remaining unchanged.

Like the model it’s supposed to replace, the Galaxy A70s retains a 6.7-inch display-diagonal and the Infinity-U screen design. The panel has a resolution of 2400 by 1080 and conceals an in-display fingerprint sensor.

Under the proverbial hood resides the same Snapdragon 675 chipset supplied by Qualcomm, which can be paired with 6GB or 8GB of RAM. Either way, the phone offers 128GB of built-in storage and can read up to 512GB of additional external memory. 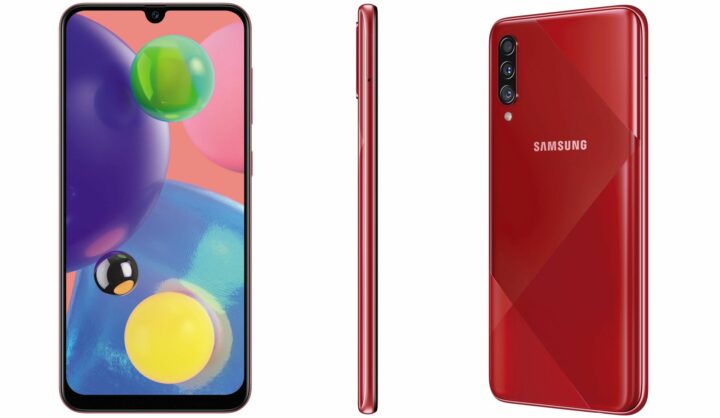 The Galaxy A70s is powered by a generous 4,500mAh battery which takes advantage of the same 25W Super-Fast Charging technology as the Galaxy Note 10 flagship. In other words, it has a battery larger than the Galaxy Note 10 – by 1,000mAh – while boasting the same recharging capabilities.

Then again, the features above are virtually unchanged from the Galaxy A70, so what does the refresh bring new to the table? Well, aside from a redesigned exterior flaunting bold geometrical patterns, the Galaxy A70s refresh also brings along a new camera setup. The rear-facing combo consists of a 64-megapixel which could very well be the ISOCELL Bright GW1, an 8-megapixel ultra-wide shooter, and an additional 5MP sensor. Meanwhile, the selfie camera offers a resolution of 32-megapixels with fixed focus and an f/2.0 aperture.

When, where, and how much will it cost?

The Galaxy A70s will be available for purchase online tomorrow (September 28) from Samsung’s e-Shop and through partner retailers, as well as offline at the Samsung Opera House. The phone will launch in two main variants. The 6GB and 8GB models will be available for Rs. 28,999 ($412) and Rs. 30,999 ($440), respectively. Prospective buyers will have the option of choosing one of three color options, namely Prism Crush Red, Prism Crush Black, and Prism Crush White.

I honestly don’t understand the point of releasing this phone now. The only difference I could see from the A70 is the 64MP primary camera sensor, a bigger chin and new colours. The rest is exactly the same.
The A70 is selling really well, why bring this one now and keep overcrowding the catalogue unnecessarily?🤦🏽‍♂️😬

The chin is 3 times the size of the a70 !!
Wtf Samsung are we moving backwords?!

Why not get the update of the dear Samsung A6 Russia ??android 10 please