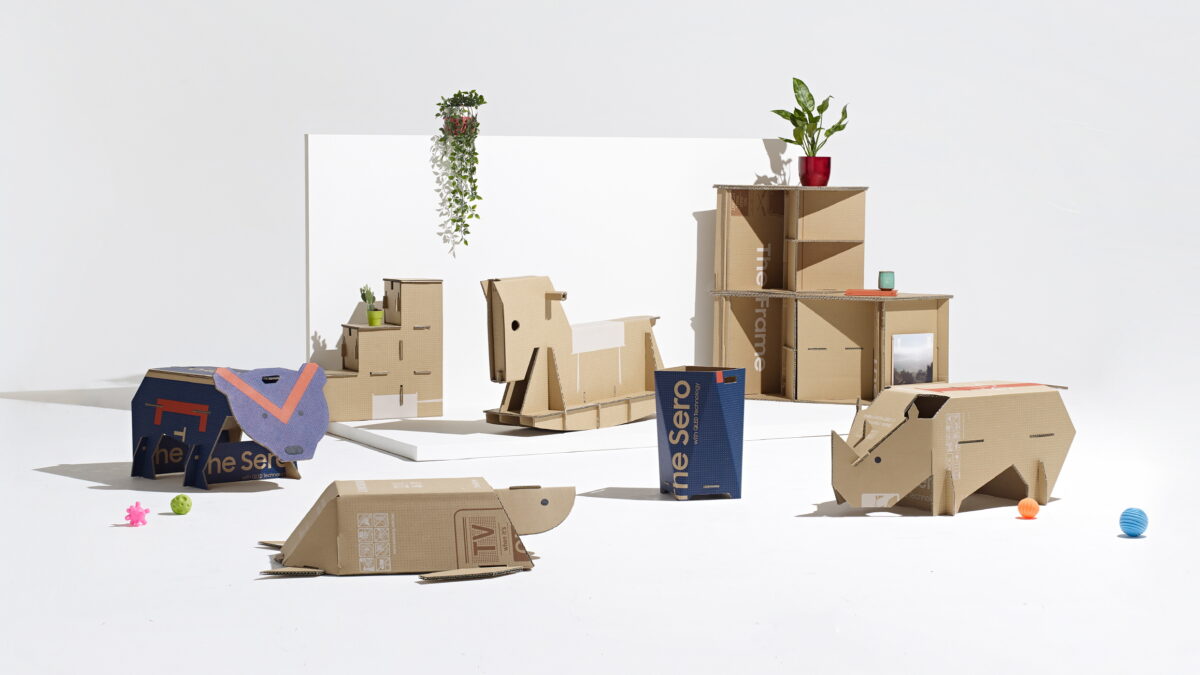 The only thing more remarkable than the fact there’s been a competition in repurposing Samsung product packaging are the winners of the said contest. Called Dezeen x Samsung Out of the Box, the event ran for five full months, launching alongside this year’s additions to Samsung’s Lifestyle range of high-end TVs. I.e. The Sero, The Serif, and the star of the show – The Frame.

To be more specific, we’re referring to the period from its introduction up until the point Samsung and Dezeen announced the winners. The actual application period ran for just under two months, ending May 29th. The contest’s total prize pool equated to $20,000.

The winner(s) emerged triumphant among 1,500 other entries from 82 countries

Early last month, Samsung and Dezeen announced the five finalists of the competition, picked out of more than 1,500 submissions originating from 82 countries. The creators behind those particularly extraordinary entries (shown above) came from India and four European countries – Portugal, Belgium, Sweden, and the United Kingdom.

The winning entry, announced this week, were the “Endangered Animals” by Sarah Willemart and Matthieu Muller. In order to emerge triumphant among hundreds of others contestants, the pair combined cuteness, functionality, and activism, as the images herein illustrate. Starting this month, Samsung will start printing QR codes on top of its TV packaging that will lead you to online instructions for replicating all of these award-winning designs, the company said.

This initiative was Samsung’s creative way to draw attention to how eco-friendly its packaging practices have gotten in recent years. Not only is the firm expected to continue revising the manner in which it stores and ships its devices, but it’s also likely to organize more similar competitions in the future. At least given how big of a hit this year’s Dezeen x Samsung challenge ended up being.

Of course, it’s worth reminding this is hardly the first instance of a Samsung-Dezeen collaboration. The tech giant has been collaborating with the London-based design magazines for years at this point. The most recent instance of such a partnership was a $40,000 contest soliciting designs for new Galaxy accessories which the duo organized last summer.

Samsung has announced that its new Neo QLED and Lifestyle TVs for 2023 have received ‘Circadian Rhythm Display’ certification from VDE (Verband Deutscher Elektrotechniker). It certifies that the Eye Comfort feature in Samsung’s latest TVs helps people maintain a healthy Circadian Rhythm so that they sleep and wake up on time. Circadian Rhythm is our […]

As we approach the new year, Samsung has announced the ‘Big TV Days’ sale in India with cashback offers, extended warranties, and assured gifts such as Galaxy Z Fold 4 and the Galaxy A23 when you buy the company’s TVs in the country. These offers are valid from December 24, 2022, to January 31, 2023, […]

Samsung’s The Frame TV is a unique product that can be used to display artwork and memories when not watching videos. Now, Samsung India has announced that it is paying homage to West Bengal and its rich art form, “The Kalighat folk,” on its lifestyle TV, The Frame. For those who don’t know, the Kalighat […]