AKG is seemingly working on a new pair of wireless headphones called the Y600NC, and they might be just around the corner. Indirectly confirmed previously by the Korean company via the Smart Things app, the AKG Y600NC doesn’t have an exact launch date, but support for the new model appears to have been added to the AKG Headphone mobile app. It was recently updated on the Play Store with a new description for the unreleased AKG Y600NC, hinting that the product could launch very soon.

What’s exciting about the so-called AKG Y600NC is the history of the Y500NC and how the new model could follow a similar path. The AKG Y500KG has been used by Samsung as an incentive and was included as a freebie numerous times alongside various Galaxy smartphones in different markets, including the Galaxy S8 and S9 series, the Galaxy S10e, and different Galaxy A (2019) models.

Based on preliminary information and the images we have so far, the AKG Y600NC should refine the existing Y500NC formula while boasting larger earcups with memory foam cushioning and zinc-alloy hinge rotators.

The official product description which appears to have been mistakenly added to the AKG Headphone app on the Play Store explains how the AKG Y600NC should provide up 25 hours of music playback via Bluetooth with Active Noise Cancellation enabled.

Unsurprisingly, the description also confirms that the upcoming headphones will be fully supported by Samsung’s ecosystem and the Bixby platform. 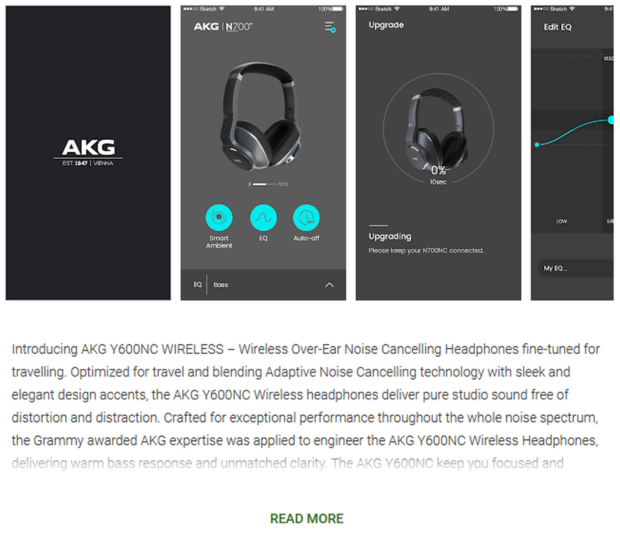 The app description does not include any availability and pricing details, but there is a possibility that the AKG Y600NC might be launched early next year (or even earlier) just in time to become an incentive for the Galaxy S11 and Galaxy A (2020) series.

Do you use the ongoing AKG Y500 headphones? If so, are there any aspects in particular that you would like to see improved? Leave a comment below.

It was long rumored that the Galaxy Buds+ would feature ANC to compete with Apple’s AirPods Pro, but they didn’t. Now, Samsung’s AKG sub-brand has released new true wireless earphones that bring active noise cancellation. On top of that, they also offer water resistance, something that the Galaxy Buds+ are lacking. The AKG N400 first […]

Are you a Galaxy Note 10 owner residing in India? Are you looking for a pair of wireless headphones other than the Galaxy Buds to go along with your flagship phone? Do you want a third-party (or second-party) solution that still guarantees full compatibility with Samsung’s device? If the answer is “yes, on all accounts” […]

The new noise cancelling USB Type-C AKG earphones Samsung will sell as a separate accessory for the Galaxy Note Note 10 and Note 10+ could cost as much as $80, according to leakster Ice universe, who tweeted out images of what is apparently Samsung’s training material for its employees in China. It was initially thought […]

At the Galaxy S10 launch in San Francisco today, Samsung also made official its newest wireless earbuds. With the Galaxy Buds, Samsung has done away with the Gear IconX branding for all of its wearables, alongside the fitness tracker and smartwatch lineups. The Galaxy Buds come with AKG-tuned audio, a feature that was missing from previous […]

[Poll Results!] Which of these audio brands are the best known in your country?

Brand value goes a long way in any industry and it’s something that audiophiles (people who appreciate high-end audio products) are very particular about. Audio brands tend to enjoy strong loyalty from their customers. They continue to innovate and offer new products so that customers keep coming back for more. It’s not uncommon for smartphone […]

Samsung flagship smartphones are some of the most expensive devices in the Android ecosystem. The company, however, tries to soften the blow by offering some freebies when you purchase its top-end models. Gear VR headsets, memory cards, wireless chargers, etc. are some of the common freebies you get when you opt for Galaxy flagship smartphones. […]