A new software update for the Galaxy A30 is rolling out in India today, bringing the June 2019 security patch and a slow motion video recording mode for the camera. The update sports software version A305FDDU2ASE5 and also brings improved compatibility with Telegram, which had removed the 2019 Galaxy A series phones from its compatibility list because of some unexplained issue with the file system. Telegram X, a newer, more advanced version of the app had no problems, and the original app should also start working on at least the Galaxy A30.

Slow motion mode missing despite being mentioned in changelog

But if you got excited that you will now be able to capture slow motion videos on your Galaxy A30, we’ve got some bad news for you. We checked our Galaxy A30’s camera app after installing the update and found that there’s no slow motion mode in there. It’s not often that you see the changelog for an update mention a new feature without actually adding it to the device, and it looks like a rather glaring oversight on Samsung’s part. The Galaxy A30 also continues to miss out on features like Bixby Routines, which were added to the Galaxy A50 with a software update back in April. However, that’s not completely surprising given the A30’s price tag.

Galaxy A30 owners can download the 460 MB update over the air by going into the phone’s Settings app, selecting Software update, and tapping the Download and install option. We’ll also have the firmware for the new update in our database shortly so you can manually flash it on your device using your Windows PC. 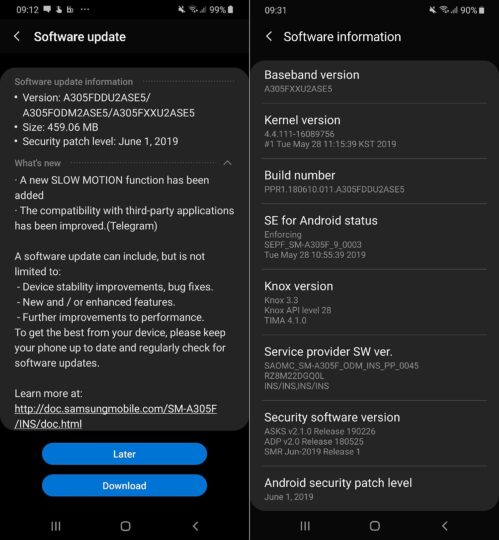 More news »
Galaxy S10 Lite picks up One UI 2.1 update in India By Abhijeet M.|1 day ago
The Galaxy Tab S6 Lite note-taking tablet is coming soon to India By Mihai M.|2 days ago
Galaxy A31 launched in India, here’s how much it costs By Asif S.|2 days ago
Galaxy A31 to sell for a higher price than A30 in India, but there’s a reason By Mihai M.|3 days ago
SamMobile Shop
Opinions More »
Samsung has nailed its smartwatch strategy and Apple knows it
23 hours ago