On a page of its US website, Samsung mentions the Galaxy A90 among other ‘Ultimate Gaming Devices’, such as the Galaxy S10 and Galaxy Note 9. This seemingly confirms both the A90’s powerful hardware and a release in the US.

‘Ultimate Gaming Device’ Galaxy A90 coming to the US

Not long ago, the Galaxy A90 was rumored to be a China-only device, bringing a few eccentric camera features to Samsung’s A series. Just recently, we found out the A90 is scheduled for a European release as well. Now, it seems a global release is, in fact, imminent, as Samsung’s own website in the US mentions the A90 by name.

As Galaxy Club points out, a promotional page for Asphalt 9 puts the Galaxy A90 squarely in the company of all S10 variants, as well as the Note 9. The page lists what it calls ‘Ultimate Gaming Devices’, suggesting the A90 will be no slouch when it comes to its yet-to-be-confirmed hardware. 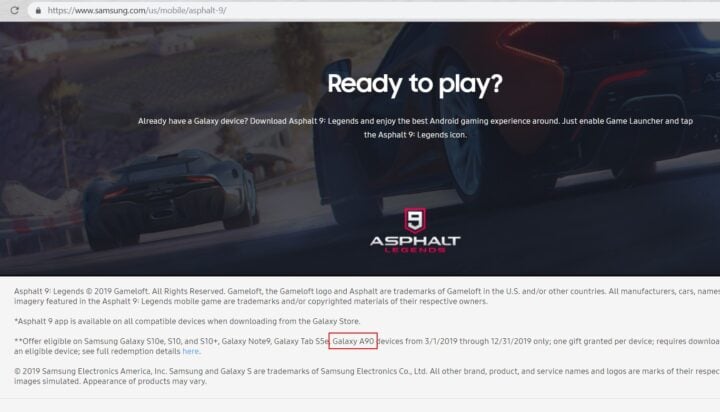 With device variants in development spanning Asia and Europe, as well as a possible US release, the Galaxy A90 is shaping up to be a very interesting device, worthy of the title Galaxy A series flagship in 2019. Of course, we do not know when exactly Samsung plans to launch the phone. But with all the signs that are popping up on a regular basis at the moment, the big reveal just might be around the corner.