January security patch rolling out for the Galaxy Note 8

Samsung has been rolling out the January security patch over the past few weeks. The latest security maintenance release has since arrived on a handful of its devices. Today, it’s the Galaxy Note 8’s turn. Last year’s flagship phablet is now receiving the security patch for the month of January 2019.

This update brings the latest patch to units running on Android Oreo. Samsung opened up the Galaxy Note 8 to its One UI (Android Pie) beta program this month. The beta firmware comes with the January patch.

Other carriers in the United States should follow suit soon. This handset is eligible for the Android Pie update but may not get it for at least over a month. The beta program is underway currently with the second test firmware being rolled out just a few days ago. 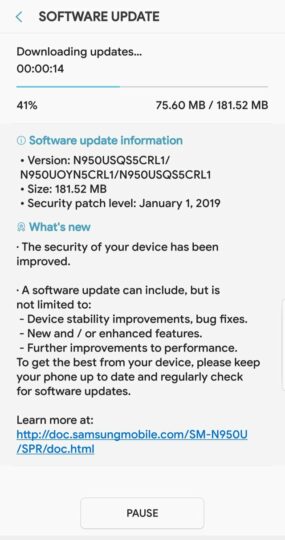