The Galaxy A8s, which is confirmed for a December 10 launch, has been certified by the Wi-Fi Alliance. The listing reveals the phone to be running Android 8.0 Oreo. The device sports the Infinity-O display and recently appeared on the FCC as well.

The Galaxy A8s will be the first Samsung smartphone to come with a hole in active display area for the front camera. It features a hole on the top left of the screen, which houses the selfie camera. The Wi-Fi Alliance certificate now confirms that the phone will come with Android 8.0 Oreo on board. And this was pretty much expected as Samsung would naturally want the Galaxy S10 to be its first phone with Android Pie out of the box. The company is still testing the One UI (Android Pie), and the Galaxy S9 and Galaxy Note 9 may get it in late January.

As usual, the Wi-Fi Alliance certificate for the Galaxy A8s doesn’t reveal anything more apart from its Wi-Fi capabilities. However, previous reports suggest the phone to sport a triple-camera setup at the back and a 24-megapixel front camera. The phone could be packing a 3,400 mAh battery.

While these specs may make you think that the Galaxy A8s is basically the Galaxy A7 (2018) with a hole, it’s not entirely true. The A8s is expected to be the first Galaxy with the Snapdragon 710 SoC, coupled with 6GB RAM and 128GB internal storage space. Also, the 6.39-inch Infinity-O FHD+ resolution LCD display could come with a 19.5:9 aspect ratio.

The Galaxy A8s is slated for an early January release in China. Whether it’ll be exclusive to the country remains to be seen. 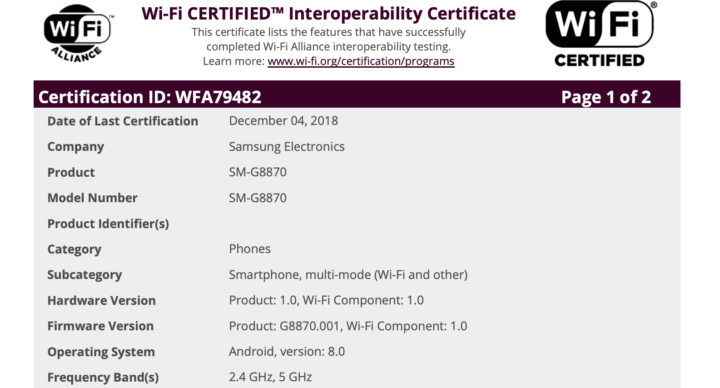