Samsung continues to maintain the title of top smartphone maker, with 19% of the global market share in Q3, 2018. The latest Counterpoint Research report shows the company to have shipped a total of 72.2 million units of smartphones during the period of July-September 2018. While that’s marginally better than the 71.6 million units the company shipped in Q2 of 2018, Samsung saw a 13% YoY decline in global smartphone market share for this period.

It had shipped 83.3 million units in the same period last year and took up 21% of the market. Global smartphone shipments, meanwhile, saw a YoY decline of 5% in Q3 2018. The largest smartphone market, China, saw a decline for the fifth consecutive quarter.

While the launch of the Galaxy Note 9 helped Samsung to post better sales in the third quarter of 2018, it’s Huawei seeing the biggest growth. The Chinese company’s market share increased by a whopping 33% in the Q3 of 2018, vis-a-vis Q3 of 2017. It shipped 53.2 million units over the three months period this year, capturing 14% of the global market. It’s pertinent to mention here that the report bundles figures for both Huawei and its Honor sub-brand. Third on the list is Apple, whose iPhone shipments remained flat annually with 12% market share. Oppo and Xiaomi make up the top five smartphone vendors with 9% market share each. 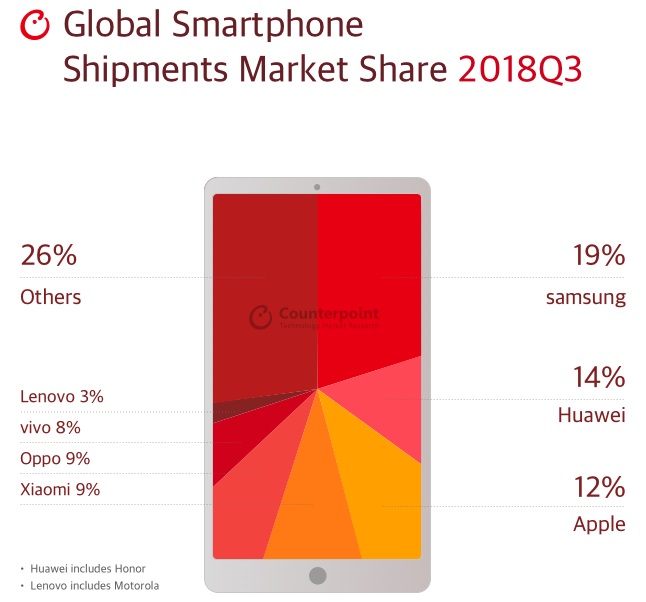