Some images of purported Galaxy S10 screen protectors have surfaced from China and they will certainly have you scratching your head. We’re heading into a season of leaks as the release of Samsung’s next major device draws near with each passing day. Samsung is expected to unveil the Galaxy S10 in February next year.

The leaks will only pick up going forward. The fact remains that not all of them will be accurate. That’s just the way it is with these things. The latest hints at very slim bezels for the next flagship.

Samsung is already expected to maximize the screen-to-body ratio as much as it can on the Galaxy S10. The company recently revealed the four new kinds of Infinity Displays that it has created. At least one Galaxy S10 model is expected to feature an Infinity-O display – the one with a circular cutout for the front camera in the display panel itself.

One of the leaked images apparently shows us the Galaxy S10 “3D glass.” We can see that the cutout for the earpiece is located at the very top. The other images show the “film” or protector which doesn’t have a cutout.

It’s unclear why there’s a significant difference between the two. It could have something to do with the multiple models that Samsung is working on. It’s expected to launch no less than four different Galaxy S10 models. It’s also entirely possible that none of this has an iota of accuracy but that’s the thing with most leaks.

Nevertheless, it’s in line with expectations that the Galaxy S10 will have bezels that are slimmer than what we have seen so far on its other flagships. We’re certainly going to see more of these purported Galaxy S10 screen protectors surface in the coming weeks. Keep that salt shaker handy. 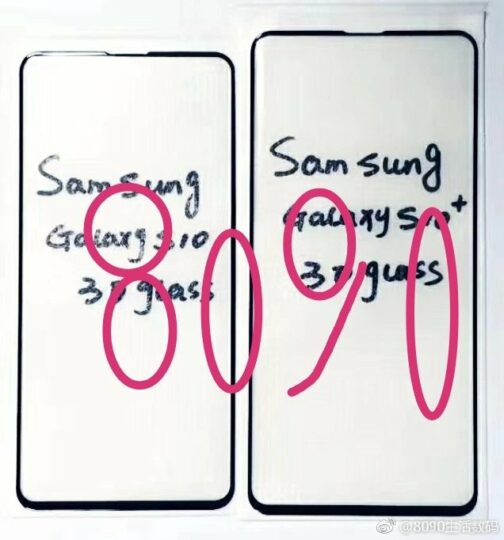