More than six months after the Galaxy A8 (2018) and Galaxy A8+ (2018) hit retail, Samsung has released the Android 8.0 Oreo update for its most premium Galaxy A series offerings. The rollout kicked off in Russia last week, along with some of the neighboring markets. While it can take a few weeks for the update’s availability to expand globally, it seems Samsung is doing things quicker this time around. Only the Galaxy A8 (2018) Oreo update may be accessible via Smart Switch first in some countries.

Galaxy A8 (2018) Oreo update may be available via Smart Switch

Major OS upgrades for Samsung devices tend to first show up over the air, although Smart Switch can sometimes get the lead. That seems to be the case for Android 8.0 Oreo for the Galaxy A8 (2018) and A8+. One of our readers from India has tipped us about the Galaxy A8+ (2018) Oreo update being available from Smart Switch. Since it isn’t yet available over the air in India, it’s possible folks in other countries will also be able to upgrade to Oreo through Samsung’s desktop tool. This does involve downloading nearly 3GB of data, though, while the OTA will be somewhere between 1GB to 1.5GB in size. 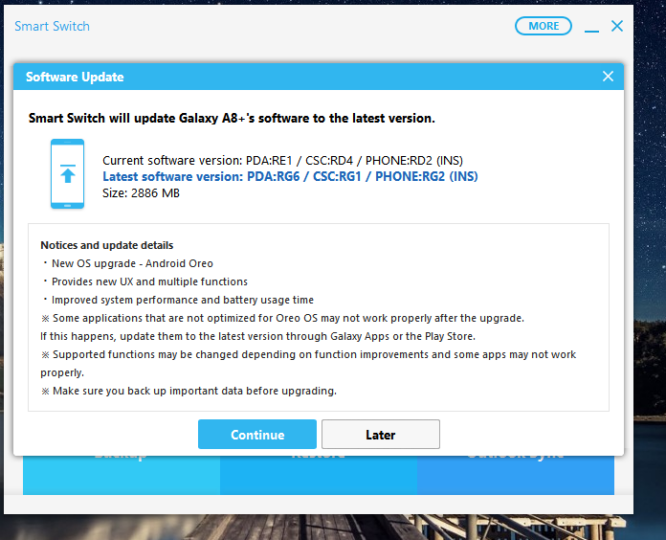 But for those who have been getting impatient for Oreo on their Galaxy A8 (2018) or A8+, the bigger download over Smart Switch shouldn’t be an obstacle. So go ahead and fire up Smart Switch on your PC, connect your phone, then wait for a few minutes and you should get a notification that an update is available. That’s assuming the Oreo update has been released via Smart Switch in your country. If not, you will have to wait for the OTA update or for the Oreo firmware for your country to show up in our database.

Update: Indian Galaxy A8+ owners can download the Oreo firmware (2GB in size) here to update right away.