It’s quite late for flagship phones to be getting the November security patch seeing how the December update has already been released for Samsung’s mid-range phones, but if you own a Galaxy S8 or Galaxy S8+ in India, your expensive phone should finally be receiving an update with the not-so-latest security patch. It’s a 500 MB+ update (firmware version XXU1AQK7) that, in addition to the November patch, includes Bluetooth stability improvements.

The November patch, as we have repeatedly been saying, is an important one, as it fixes the KRACK Wi-Fi exploit. It’s an exploit that hasn’t been taken advantage of in a major way yet, and it also doesn’t help if the router or network your phone is connected to hasn’t been updated with a patch for KRACK, but it’s still something that needs to be fixed on priority. That’s what the new update does, so if you have a Galaxy S8 or S8+ in India, you should grab it as quickly as possible. 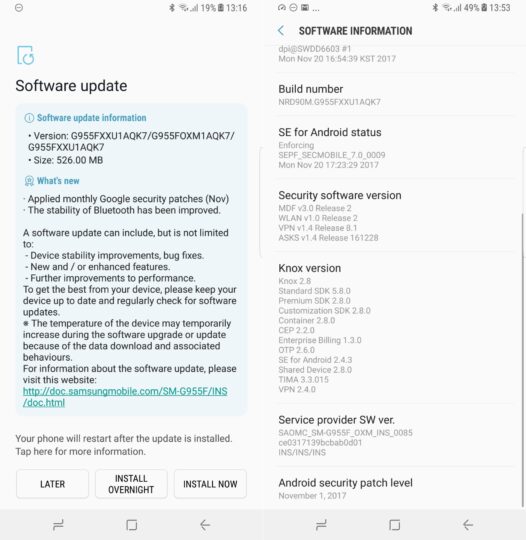 How do I get the update?

Open the phone’s settings, go into the Software update section, then tap the Download updates manually option. Alternatively, you can download the firmware from our database and use a PC to upgrade, although we only recommend this if your phone is unable to get the update over the air.